I know you've all been on tenterhooks. Probably checking in multiple times this morning, wondering about the outcome. Does the Bus War continue? Has peace been declared? Was there screaming, slapping, and hair-pulling in the bus aisle?

As I pulled into the Park and Ride this morning, there she was. Sitting in her car waiting for the bus. It wasn't a cold morning. I could have gotten out and waited at the stop early, so as to be able to get on the bus before she did. And 2 days ago, that's exactly what I would have done. But if I just got on the bus first today and claimed the seat for myself, no questions would have been answered.

So I waited. I fished around in my purse looking for my phone. (I really was trying to find it... I discovered later it was actually in my jacket pocket.) I checked to be sure I had my bus pass. I filed a rough spot on my fingernail. (I didn't find the phone in my purse, but I did find an emery board - odd, because I didn't even know I owned one.) And when the bus appeared, I finally got out of my car to head down to the stop.

She got out of her car at the same time. And as we walked down to the stop, she did something she has never done before. She talked to me. She has always been quiet and a little standoffish, so this caught me by surprise. But we chatted a little about the nice weather as we walked to the bus. And when we got there, I hung back just a little so she could get on first.

She climbed the stairs. She walked to The Seat. She paused. And then she moved on and sat in the seat behind The Seat.

I won! The Seat is mine! She had every opportunity to take The Seat this morning, but must have remembered yesterday's conversation about preferred seating arrangements, because she moved to a different seat and left The Seat to me. What a glorious start to a Friday morning. :) I am the victor in the Bus War.

Of course... now I have no exciting status updates for you all to follow in the mornings. My sock/no-sock status is pretty lackluster (pretty much always no-sock). Now that spring is finally here (right? please?) there's no longer a tense wait to learn whether school is or is not in session. An update on my struggles with the department down the hall (Did they send me the correct file? Or tell me it was the correct file but will come back next week and tell me they were wrong and I should scrap all the work I've done with it? Will they just not give me anything at all?) would just be depressing for all involved.

So if you have any interesting ideas, let me know. :) But for now, I am declaring an end to the battle for The Seat. Hooray!
Posted by taradon at 8:44 AM 1 comment:

If you're a friend of mine on Facebook, you've probably been following (whether you like it or not) the saga of my running battle with The Seat Stealer. Actually, I've been shocked at hearing how many people check in to read my goofy bus seat updates in the mornings. Glad that I'm entertaining to you all, though! :D

To sum up for those who aren't on Facebook, I have a favorite seat on the morning bus. The Seat is perfect. It's two rows back, which means that the people who want the very front seats have already found a seat before they get to my row and it's too far forward for the people who like to sit at the back. So I usually get the row to myself. There is a floor heater a couple of rows back... which means my row gets the benefit of warm toes without the scorched calves from sitting directly over the heater. And it's on the left, which makes The Seat better for no particular reason. I just always sit on the left side of the bus.

I have been sitting in The Seat for almost 5 years. Every morning, I get on (at the first stop, so I have my pick of seats), sit down in The Seat, joke around with my fellow early-morning passengers for a few minutes, and then take a nap on my way to work. It's a good start to my day. But a couple of months ago, a new person started riding our bus and getting on at the first stop. And she sat in The Seat! Of course, I turned to Facebook to tell everyone about my trauma.

And it continued. Since mine is the first stop, the bus usually gets there 5-10 minutes early and we can get on and wait for time to go. I would get to the bus and find her already sitting in The Seat. I soon dubbed her The Seat Stealer. So I tried to get there earlier and get The Seat first. With varying degrees of success. 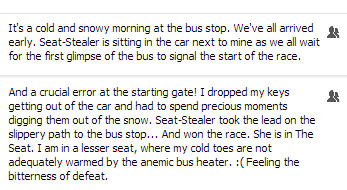 But this morning came a defining moment in the bus war. The moment that will allow us to learn, once and for all, if The Seat Stealer knows that we are racing for The Seat.
We were joking around as usual on the bus this morning. As usual, Seat Stealer was sitting quietly and not participating much. We don't hold that against her - she must not be a morning person. I was in The Seat. The conversation turned to the fact that we are all such creatures of habit that we even park in the same spots in the parking lot each morning. And most of us sit in the same seat every day.
I seized my chance. I pointed out that Kelly always takes the front seat because she gets carsick, Wendy always has the third row because she's tall and there's a little extra legroom. Maria always takes the spot by the wheelchair entrance. And I mentioned that I always like the seat in the 2nd row from the front on the left. It's my favorite seat and I try to always sit there. I may have mentioned it a couple of times. (Wendy winked at me... she knows my frustration at not always getting The Seat.)
So now it's out. I publicly proclaimed - right there in front of Seat Stealer - my love for The Seat. Now if she continues to sit there, we'll know that she's doing it deliberately and truly IS a Seat Stealer.
If you were here with me now, you would hear the incredibly appropriate background music that happens to be playing on my iPod...
"Tomorrow we'll discover what
our God in Heaven has in store!
One more dawn...
One more day...
One day more!"﻿
Posted by taradon at 9:52 AM No comments: 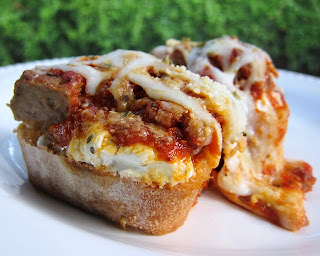 I showed Aaron a picture of a delicious Meatball Sub Casserole (giving credit where it's due: http://www.plainchicken.com/2012/05/meatball-sub-casserole.html) on Pinterest and proposed making it for dinner this week.

Instead of the enthusiastic response I anticipated, I heard: "Hmmm... it looks too messy."

"That's why it's a casserole. You can eat it with a fork."

"But there's bread on the bottom. That's weird."

"That's what makes it like a meatball sub. We could slice the bread thinner than in the picture."

"Bread in a casserole is just too strange. Maybe if you just made it with the stuff on top and without the bread."

"Yeah. And then you could serve it over pasta or something."

"So... spaghetti and meatballs."