The Suspense is Killing Me

I'm waiting for an email, or maybe a phone call, or maybe an old-fashioned snail mail. I don't know what form the news will come in. And I don't really know when to expect it.

I'm waiting for news about a new job. I really liked everything I learned about the job during the interviewing process. I like the duties, the hours, the location... I REALLY like the location, which would be an office in my own house. I like the fact that they describe the pace as "relaxed" and the atmosphere as "laid back." Given that words describing my current job include things like frenetic, drama, and stress, that sounds quite nice.

I'm not quite as thrilled about the travel. 6-10 weeks a year. Mostly to L.A., but some other locations too. I like visiting other places and I actually love staying in hotels, but I don't enjoy flying. And I'd feel guilty about leaving Aaron and the kids. And of course, there's the fact that what they hoped to pay for this position and what I hoped to be paid for this position are about $15,000 apart. I can't afford to stretch my budget down, so I have to hope they will stretch their budget up.

But everything else about the job is so good. This job is basically the same position as the promotion I was vying for at my current job. It's a shame I had to look for it at another company. I had really planned on staying at this place for the long term. But between being downgraded to hourly, being classified as support staff instead of professional staff, and then being passed over for the promotion, my heart just isn't in it here anymore.

So instead, I'm hoping and praying that I can get this new job and move on. I know the grass is always greener and I'm sure to discover new frustrations in working with veterinarians instead of nurses, but I sure hope I can give it a try.

I heard from the interviewer on Tuesday and I was still in the running at that point. He told me they hoped to make a decision by Thursday. So here it is Thursday... and no word yet. I have been checking email constantly, hoping for word. Hoping for the right word. Cross your fingers for me that I'll hear from them tomorrow - with a job offer - for the right salary... Here's hoping!
Posted by taradon at 8:05 PM No comments:

We got a new bus driver on the morning route about 2 weeks ago. It's taken him a little while to warm up and start joking around with us like our old bus driver did, but he's gradually loosening up. This morning, he offered an observation.

{Driver Dan (really, that's his name)} "So all of you sit in the same spot every morning. Is it like assigned seats on this bus or something?"

{Wendy} "Yep. We worked it all out years ago. This is where we sit every day. We don't like change."

{Driver Dan} "But what would happen if somebody messed it up? Say she (points at Quiet Lady, formerly known as Seat Stealer) decided to sit in your (points at me) seat one day?"

"Well, then I would have to call her a Seat Stealer and complain to all my Facebook friends about it every day." 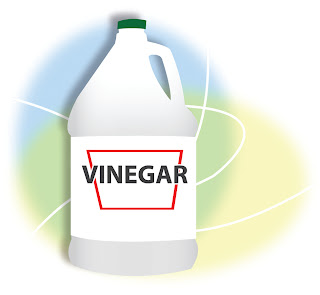 Now I realize that taking cleaning tips from me is like asking a supermodel for cooking lessons (as anyone who has seen the natural state of my house can attest) but I actually stumbled across a good one and thought I'd share.

For the last couple of months, my dishwasher has had a strange, musty odor. The dishes are still clean, but every time you open the dishwasher you get a waft of this unpleasant smell. I've tried cleaning the inside, just in case there was a piece of food lodged somewhere. I've tried running it empty so the dishwasher detergent could just wash the dishwasher. I even bought a pack of dishwasher cleaning tablets and use those. And still the odor remained. Bearable, but annoying.

This morning I loaded the dishwasher and realized that I was out of rinse aid. I didn't have any more to refill the dispenser, but I hate to do without it because I don't like the cloudy film that our hard water leaves without it. I remembered a tip I'd seen on one of those 100 Uses for Vinegar lists on Pinterest that said you could add distilled white vinegar to the dishwasher as a rinse aid. I was a little skeptical, since some of the vinegar uses I've tried in the past have not worked out. (My weeds are still flourishing.) But I decided to give it a try - hoping that the whole house wouldn't end up smelling like I'd been dyeing Easter eggs.

So I was thrilled to open the dishwasher at the end of the cycle and discover - no vinegar smell and no strange odor! It totally eliminated that weird smell I've been fighting for months. And the dishwasher and dishes don't smell like vinegar at all. And everything is sparkly clean. Awesome!
Posted by taradon at 3:33 PM 1 comment: 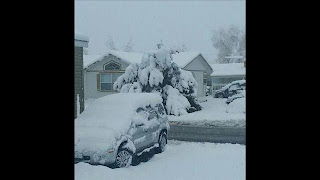 I walked out the door this morning into a heavy, blowing snowstorm. As I huddled in my coat trying to protect my face from the snow while scraping enough snow off the car that I could drive, I heard the birds tweeting in the trees beside me. It was going back and forth from one bird to another as if they were having a conversation. And in my head, this was the conversation they had.

(And no, I don't know why they talk in text-speak and have such an attitude problem... don't blame me, I'm just reporting the conversation.)

"Right? What is up with all this snow?"

"Seriously, we migrated for this? We could have stayed down south for another month or two until spring really arrived. But no. The early bird catches the worm and all that crap. We just had to hurry back north. This sucks."

"It really does. It's supposed to be springtime for cripes sake."

(birds fly away)
Posted by taradon at 8:54 AM No comments: