My ADHD Boys Have My Attention... and Still Need Medication 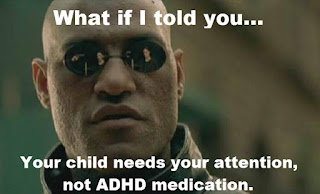 Earlier this week, a friend of mine posted this meme on Facebook. I really like this friend and I didn’t want to start a fight, so I just responded to the post with, “Believe me, sometimes they really need the medication, too.”


There’s a huge movement on the Internet right now to talk about how ADHD is over-diagnosed and how ADHD medication is over-prescribed. Many commenters go to the extreme of telling you that ADHD isn’t even a real disorder; it’s just a matter of kids being kids and adults being unable to deal with their natural energy.


Boys are energetic naturally. They need to have the chance to run and play and get their energy out through physical movement, and too often they’re stuck sitting in a desk for long stretches of time. It’s perfectly normal for kids to get restless when they feel cooped up. But let’s talk about the difference between that kind of restlessness, and a true ADHD inability to hold still.


Boy #2 is seven and full of energy. Full of energy to the point that when he tries to sit still, some part of his body will start to involuntarily jerk and twitch, even when I can watch him and see that he’s trying so hard to hold still as he was asked. Maybe his feet start to tap in place as he sits at his desk. Maybe his head begins to bob to an internal rhythm. Maybe his fingers need to fiddle with his pencil and crumple his papers.


The longer he has to hold still, the worse the fidgets get, to the point that he quite literally falls out of his chair at school. This happens almost every day, and often multiple times per day. When he’s trying to play a video game, his hands and eyes are fully involved with the game, yet his lower body acts as if it’s completely independent of the rest of him as his feet dance and kick wildly and without his conscious direction.


He can’t even stop moving as he sleeps. He kicks and tosses and turns and rolls. A full-size bed doesn’t provide enough space for this seven-year-old child, and every night we could hear the solid thump and Boy #2 rolled himself right off the bed and onto the floor during his sleeping gyrations. Eventually, we moved his mattress onto the floor so he wouldn’t have so far to fall. Now he can be found in every corner of the room at some point during the night, but at least he’s not banged up from hitting the floor.


Boy #1 is nine and he’s a little less extreme as far as the physical activity goes. He gets twitchy and fidgety like his brother, but has it a little more under control. Where his ADHD really shines is in the racing of his mind and his mouth. That boy can and will talk your ear off about any of the hundred and one things that catch his attention in a fifteen-minute conversation. And it doesn’t stop. Not ever. Earlier this year I was his captive audience on a six-hour drive full of non-stop darting from Topic 1 to Topic 2 to Topic 3 and back to Topic 1, but only for a moment because that reminds me of Topic 4, and hey have you ever thought about Topic 5, 6, 7, and 8? After four hours or so I was ready to tearfully beg him to play a video game or watch a tv show for a few minutes so I could have a tiny break.  But it’s compulsive for him. He talks when he doesn’t even mean to talk. He talks right up until the moment he finally falls asleep.


Now picture these two boys – one who can’t stop moving and one who can’t stop talking or focus on a single thought for more than a few moments – in elementary school. They love their teachers. They don’t want to be in trouble for breaking the rules. And they literally cannot follow the rules because their bodies and brains won’t cooperate.


Next, picture homework time. They’ve had time to decompress after school and run around and be kids, but now it’s time to settle down and focus on a worksheet. Boy #1 is talking a mile a minute about several unrelated topics while restlessly moving from couch, to chair, to desk, and back again. Boy #2 is rolling around on the floor, kicking his feet in the air, and twitching his shoulders while he tries to look at his worksheets. And what might be ten to twenty minutes of homework for other kids in the class takes an hour or two because Boy #1 can’t stop talking long enough to focus on the work at hand and Boy #2 can’t stop moving long enough to even look at it.


They need discipline! That’s what we hear. If you were just better parents, this wouldn’t be a problem. Remember that meme from the beginning of the post? Apparently, my kids just need my attention. 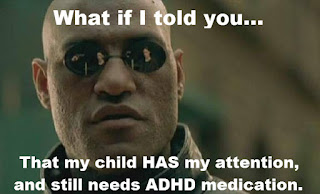 Well, what if I told you that my child HAS my attention. In fact, I found a new job where I could work at home so that I could provide more attention. At homework time the boys have at least one and often both parents sitting with them and helping them through. Outside of homework we take them to museums and on trips to see the world around us, we look at books and watch shows with them, we encourage their interests.


At school they have dedicated teachers who are giving them attention and doing everything they can to help these boys focus and learn. We go to meetings with those teachers and discuss what else we can do at home and at school. There are weeks that I am in contact with the teachers multiple times per day. Believe me, we are paying attention.


It helps. It doesn’t turn them into perfectly-behaved little Stepford children. Boy #1 still has a LOT to talk about and has to be encouraged to slow down and focus. Boy #2 still wiggles around, but hopefully he stays in his chair instead of falling to the floor. 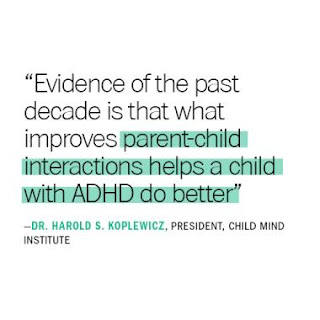 And maybe mom and dad feel a little more sane and in control, too, because the wild behavior is no longer pushing them over the edge. Dr. Harold S. Koplewicz, president of the Child Mind Institute, states, “Evidence of the past decade is that what improves parent-child interactions helps a child with ADHD do better.”
Just that little bit of help for your child from the medication can vastly improve your parent-child interactions, because you’re no longer spending all your energy just trying to catch their attention for a moment. Instead, you can spend time actually engaging with your child, not just trying to moderate their behavior.


So yes, my boys have my attention, but they also need their medication. I’m grateful to have the option.