To make up for the time lost to rainstorms yesterday, we got up early to get out and explore before the rainstorms hit in the afternoon. We drove to Monte Verde and Santa Elena reserves to see if there were good hikes for our family. As it turned out, the rangers shared that the paths were very muddy and rugged and not especially suitable for kids. There were some small paths that we could have done, but the entrance fees were as steep as the paths. It just wasn't worth it for the half mile of paths that would have been accessible to us.

Instead, we did some 4 wheeling through the forest on the almost invisible roads. As usual, Aaron would find the smallest, most obscure excuse for a trail and head off into the middle of nowhere. These roads were crazy! Nothing more than rocks and mud, steep ups and downs, incredibly bumpy, 4-wheel drive definitely required. It's not my favorite way to spend the day, but there's no denying that we got some truly incredible views from that outing. And Aaron and the kids loved it. 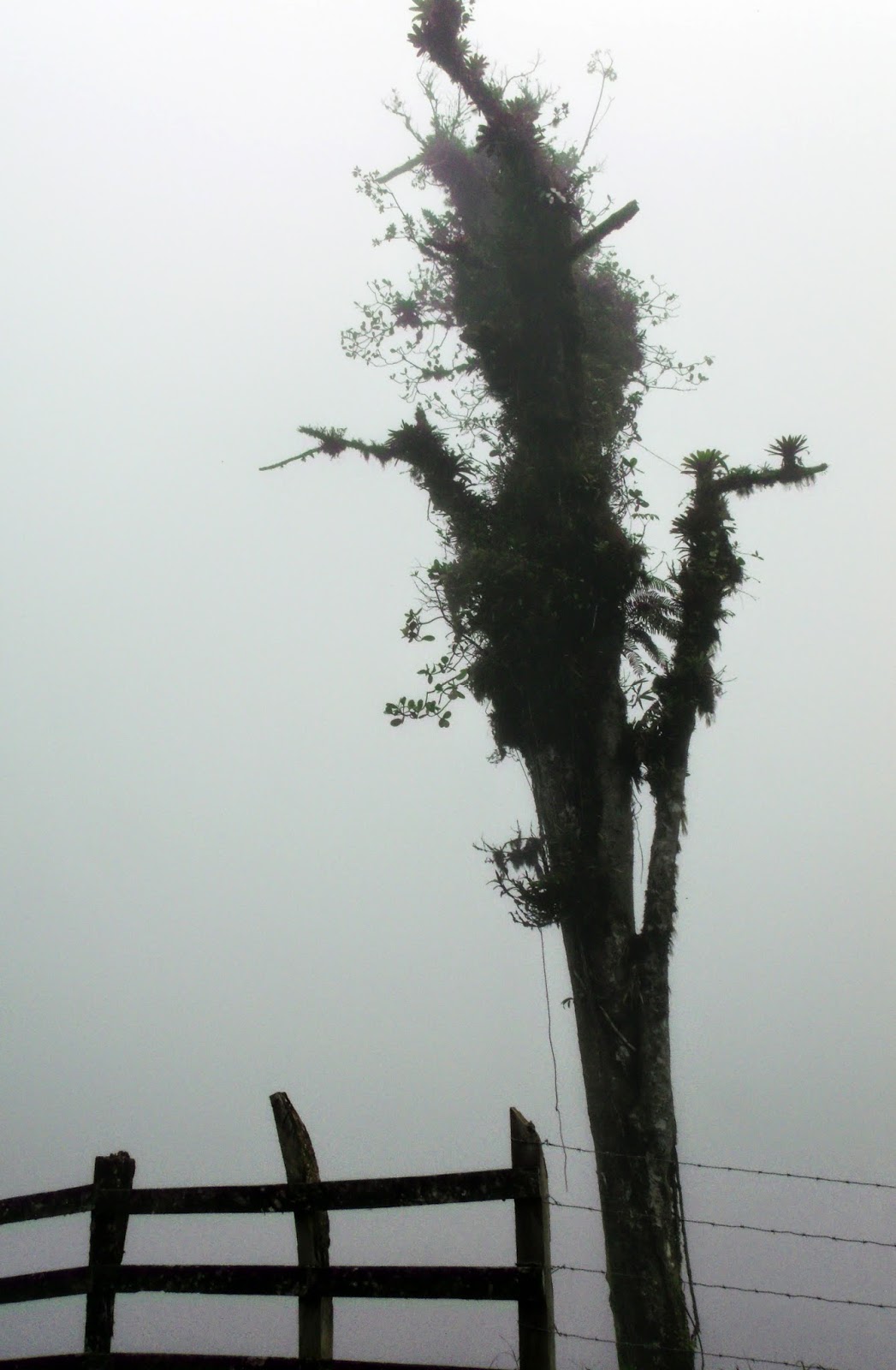 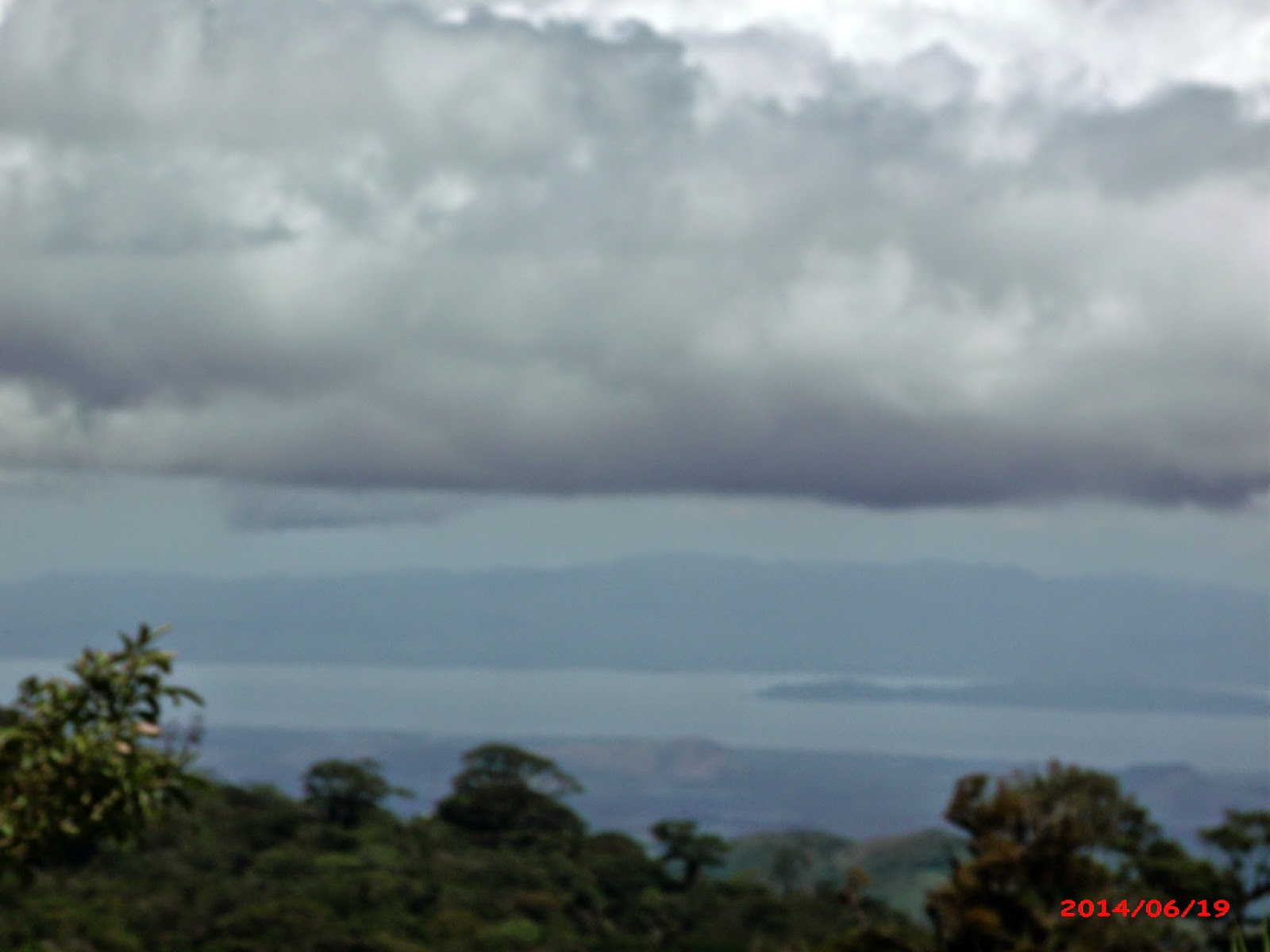 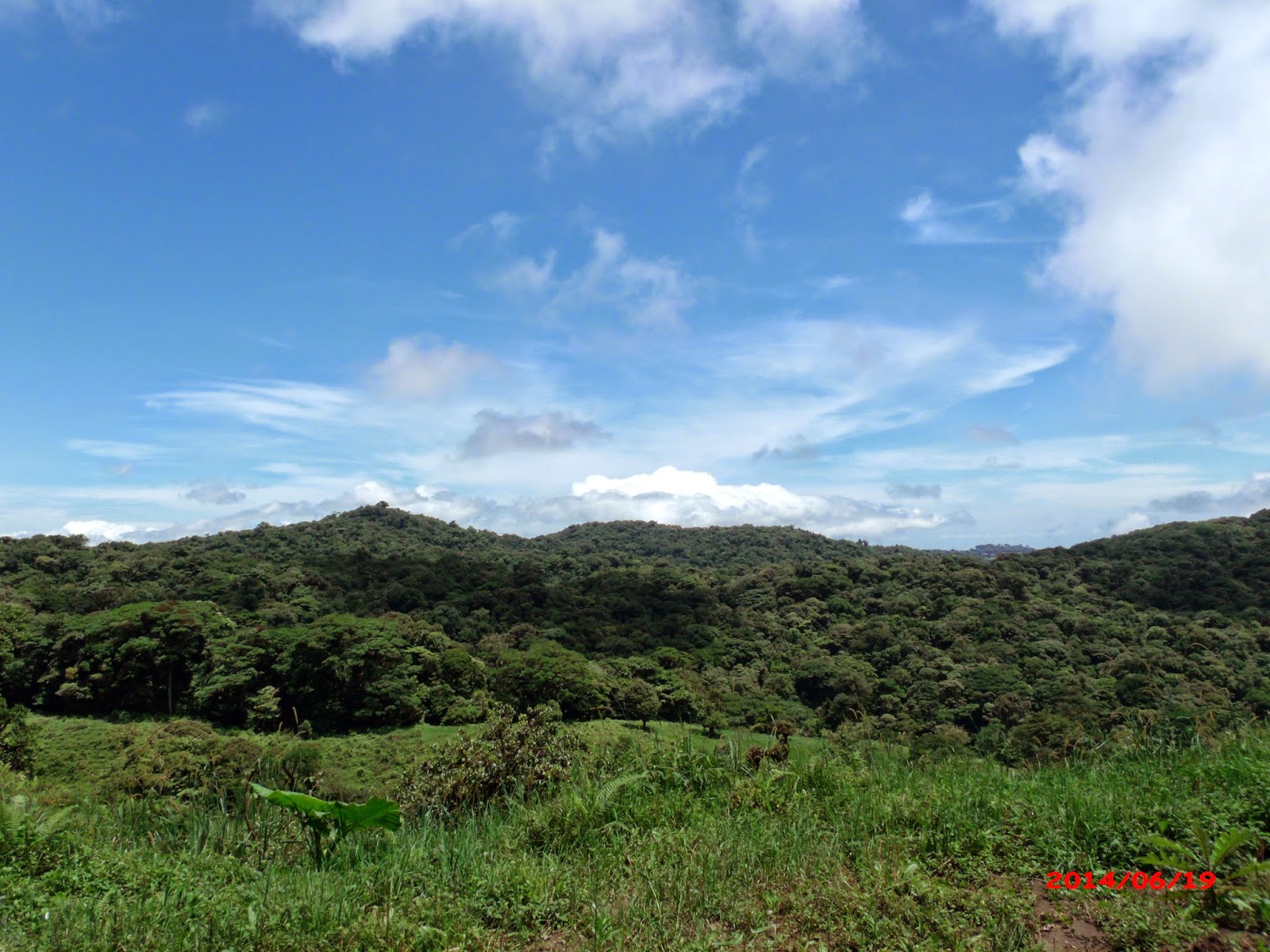 After our off-roading adventure, we visited the hummingbird gardens at Selvatura. Unlike most of the Selvatura attractions, this one is not only more reasonably priced at $5/person, but also a nice calm activity. The gardens are cool and shaded (Ticos were bundled up in jackets and scarves) and had lovely plants and trees and trickling water features along with many hummingbird feeders. There were so many hummingbirds! I have never seen so many in my life. So beautiful. Tiny ones the size of your thumb to large birds bigger than your fist. All of them darting back and forth from feeder to flowers and all around the garden. There were so many that there was a constant low-level hum from the wings. Several times birds zipped by so close that I could feel the wind from their passing against my cheeks. Tons of fat fluffy bumblebees eating from the feeders also. They were so busy eating that you didn't feel at all worried that they would take an interest in you. 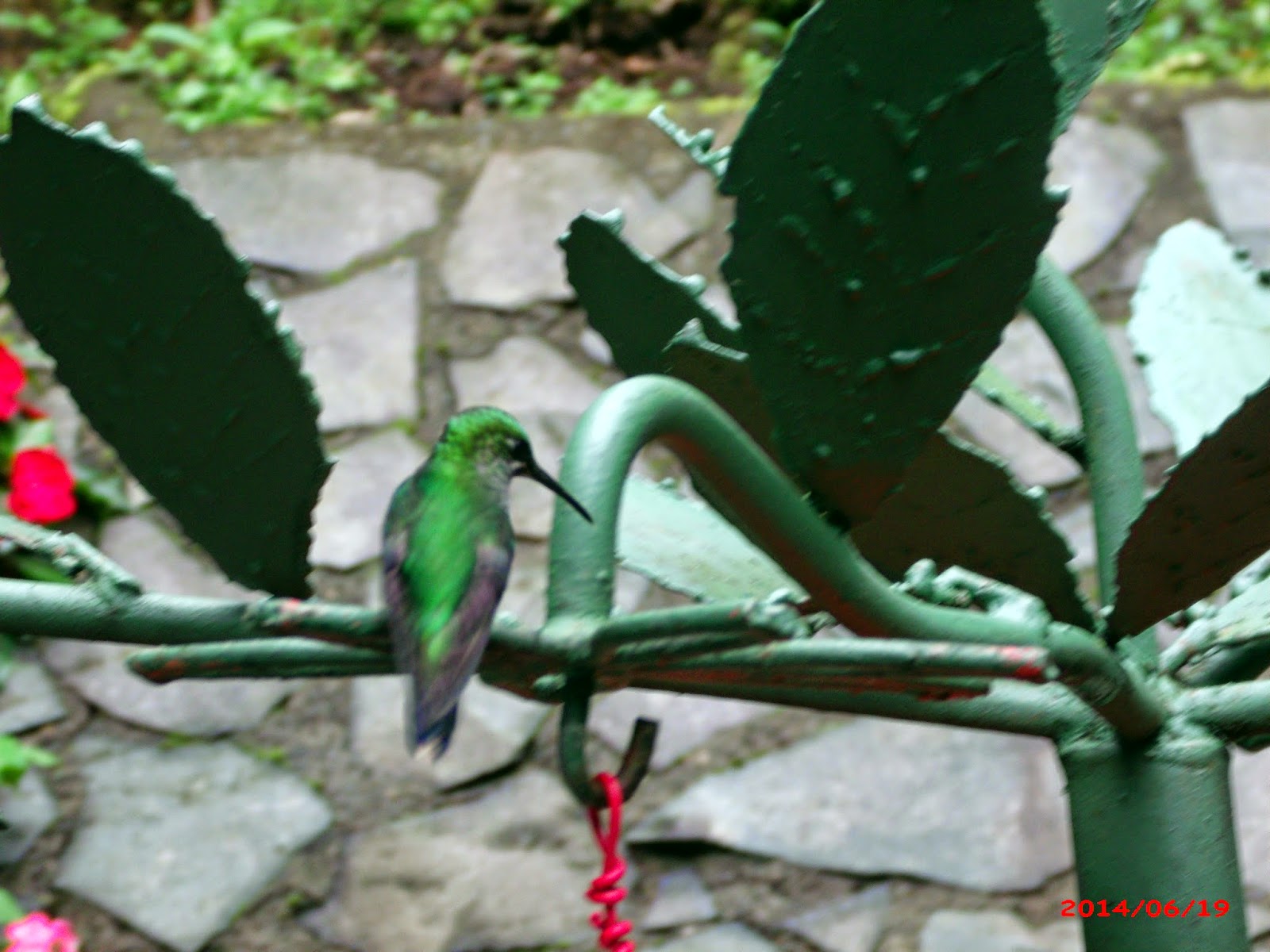 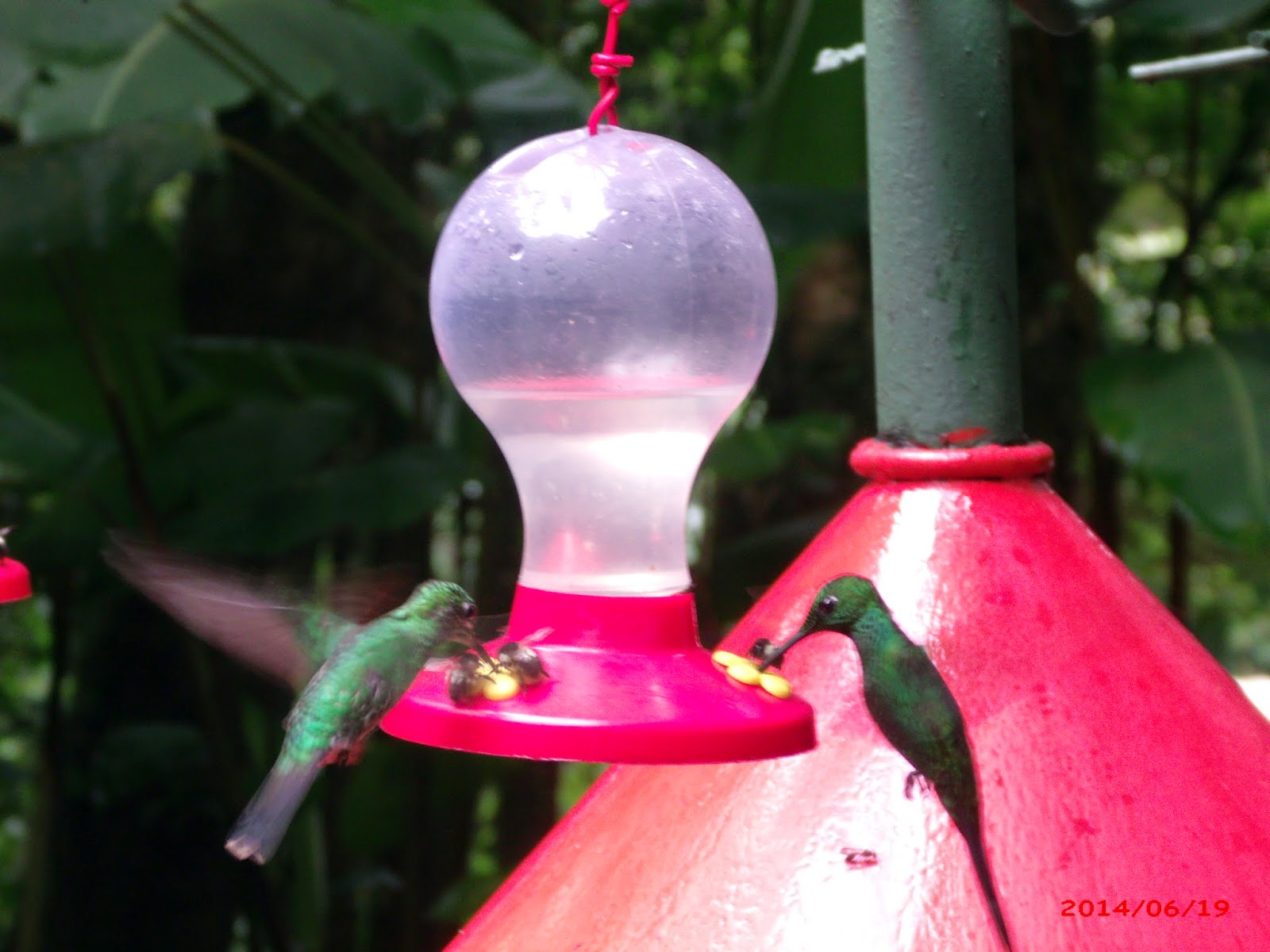 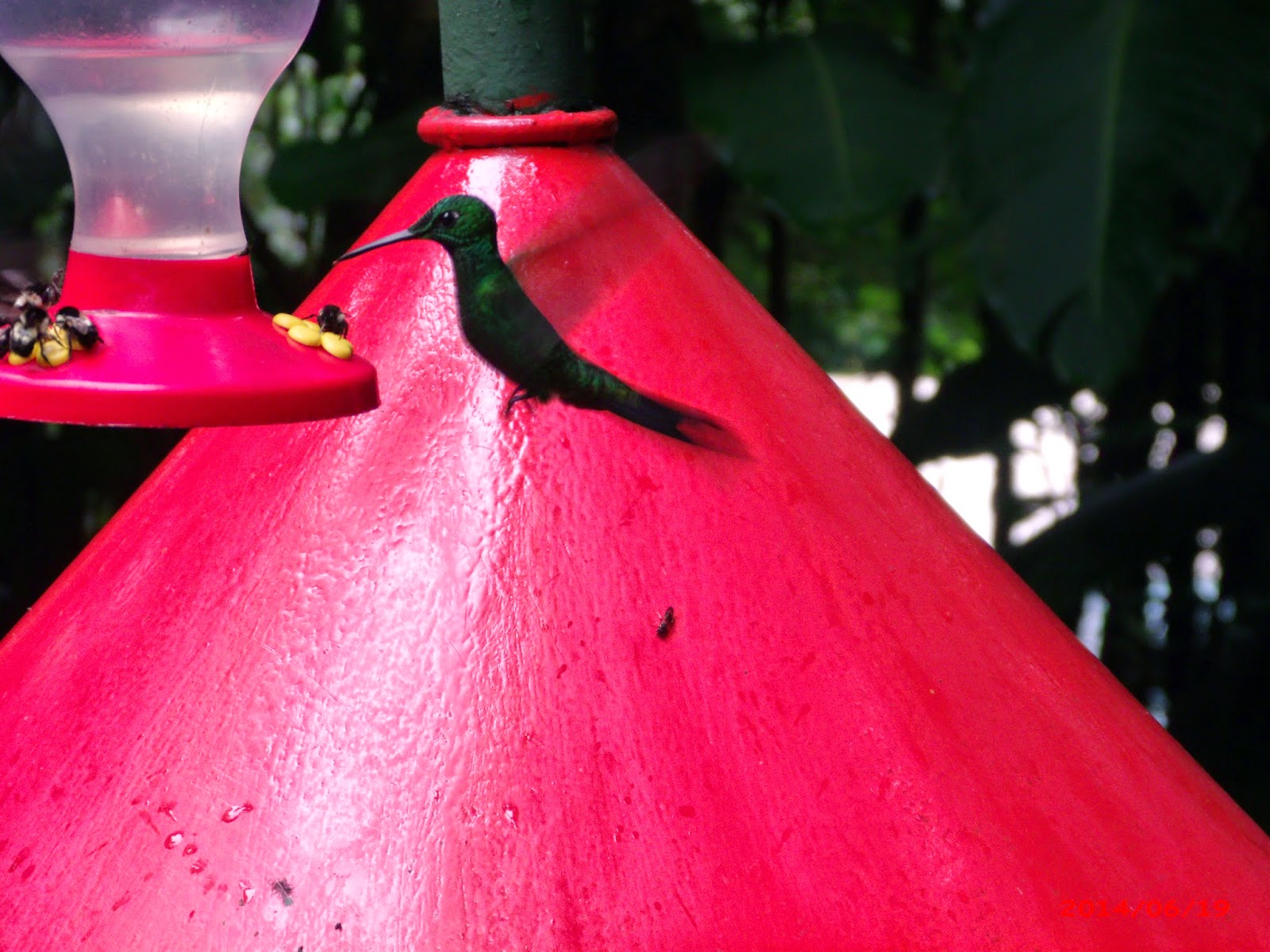 We spent probably an hour entranced by the huge variety of beautiful little birds. Most of the time we were the only ones in the garden. Well worth the entry fee.

After the hummingbirds we went to some butterfly gardens. There are at least 3-4 options for butterfly gardens in Santa Elena and Monte Verde, but the one we visited was really excellent. It had a couple of kilometers of paths through 4 butterfly habitats. A free guide took us through the full park... about 1.5 hours. The butterflies were beautiful as well and fluttering everywhere around us. It was hard to get pictures of them, but everywhere you looked you saw more. 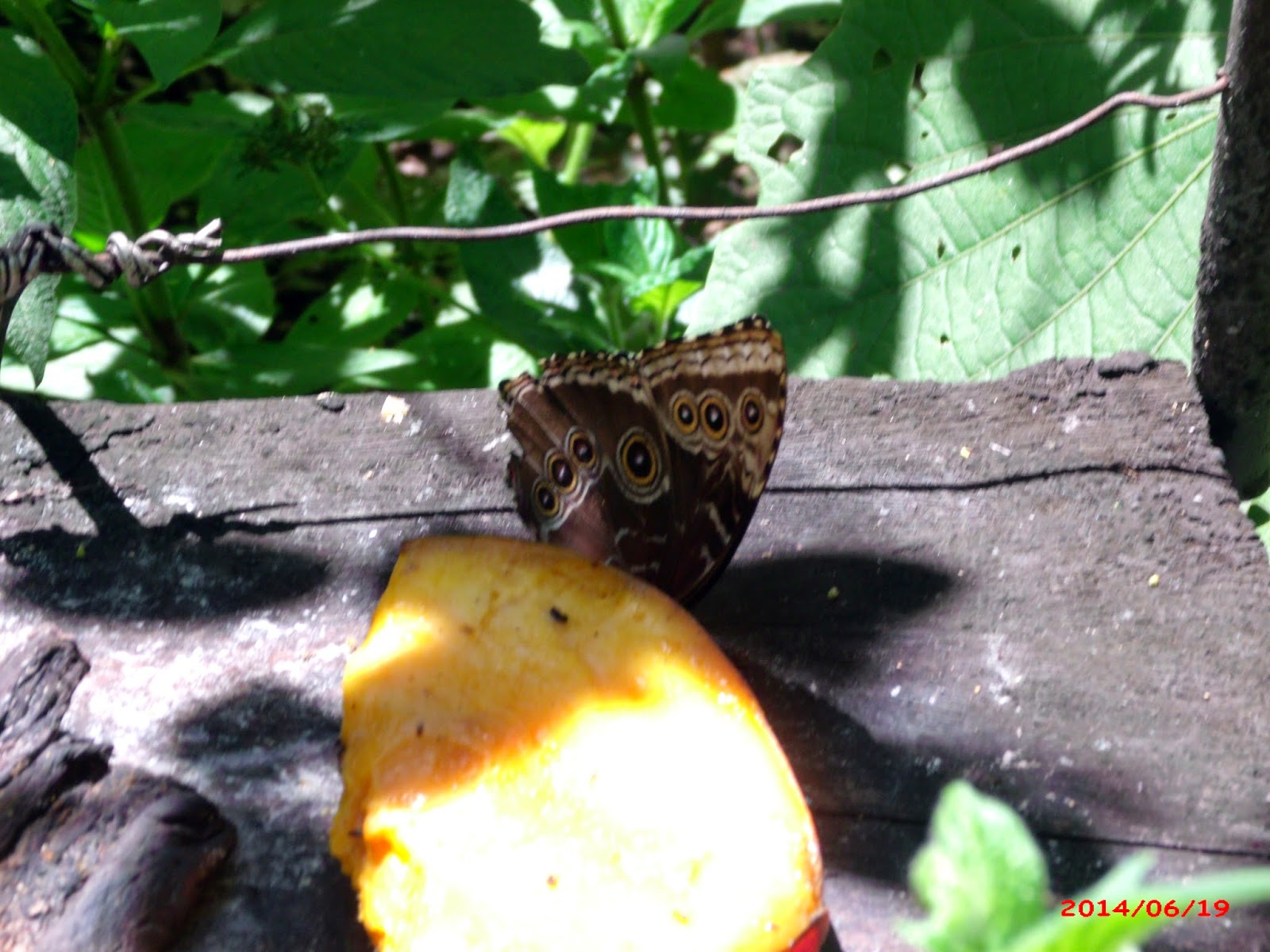 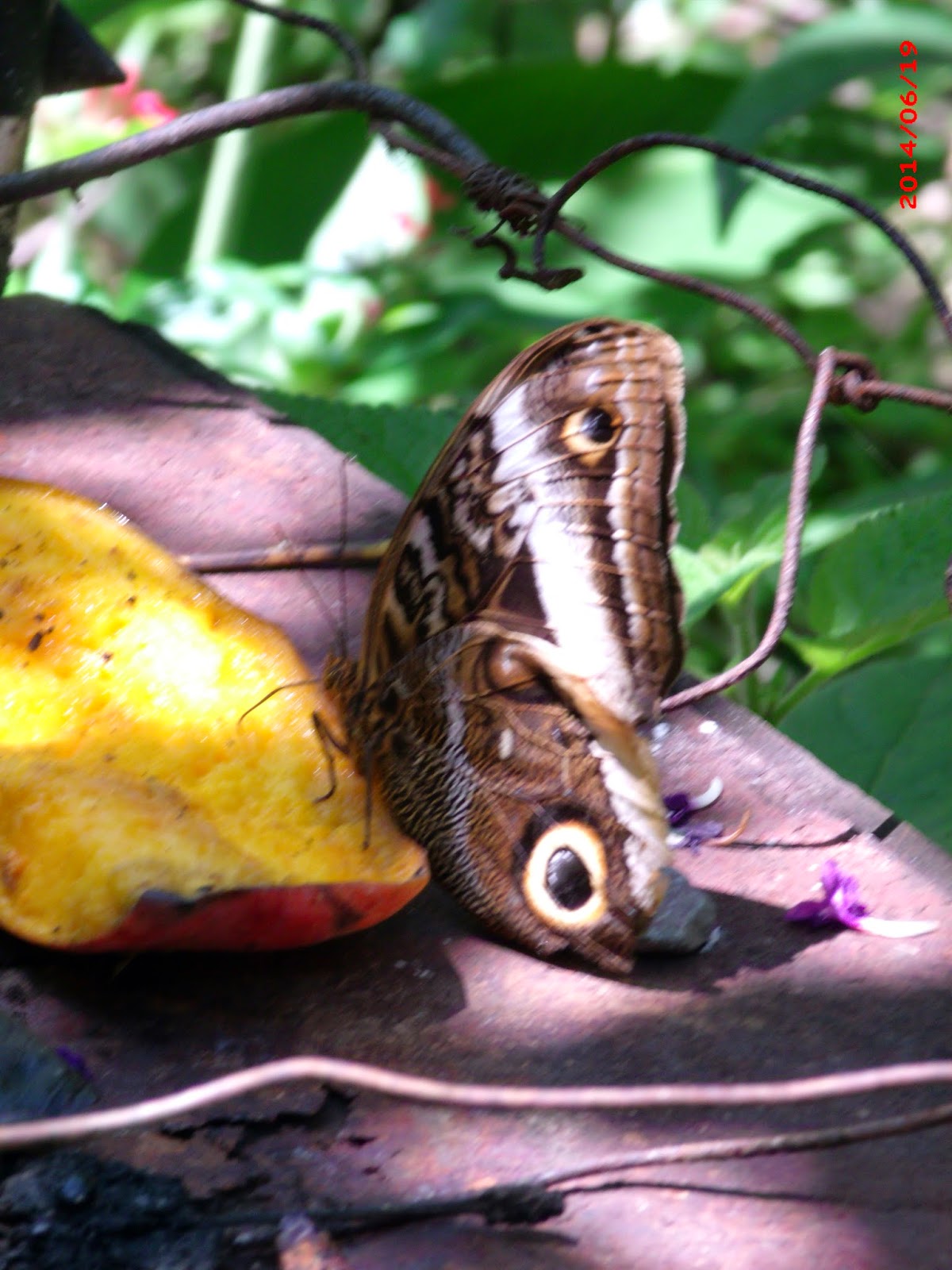 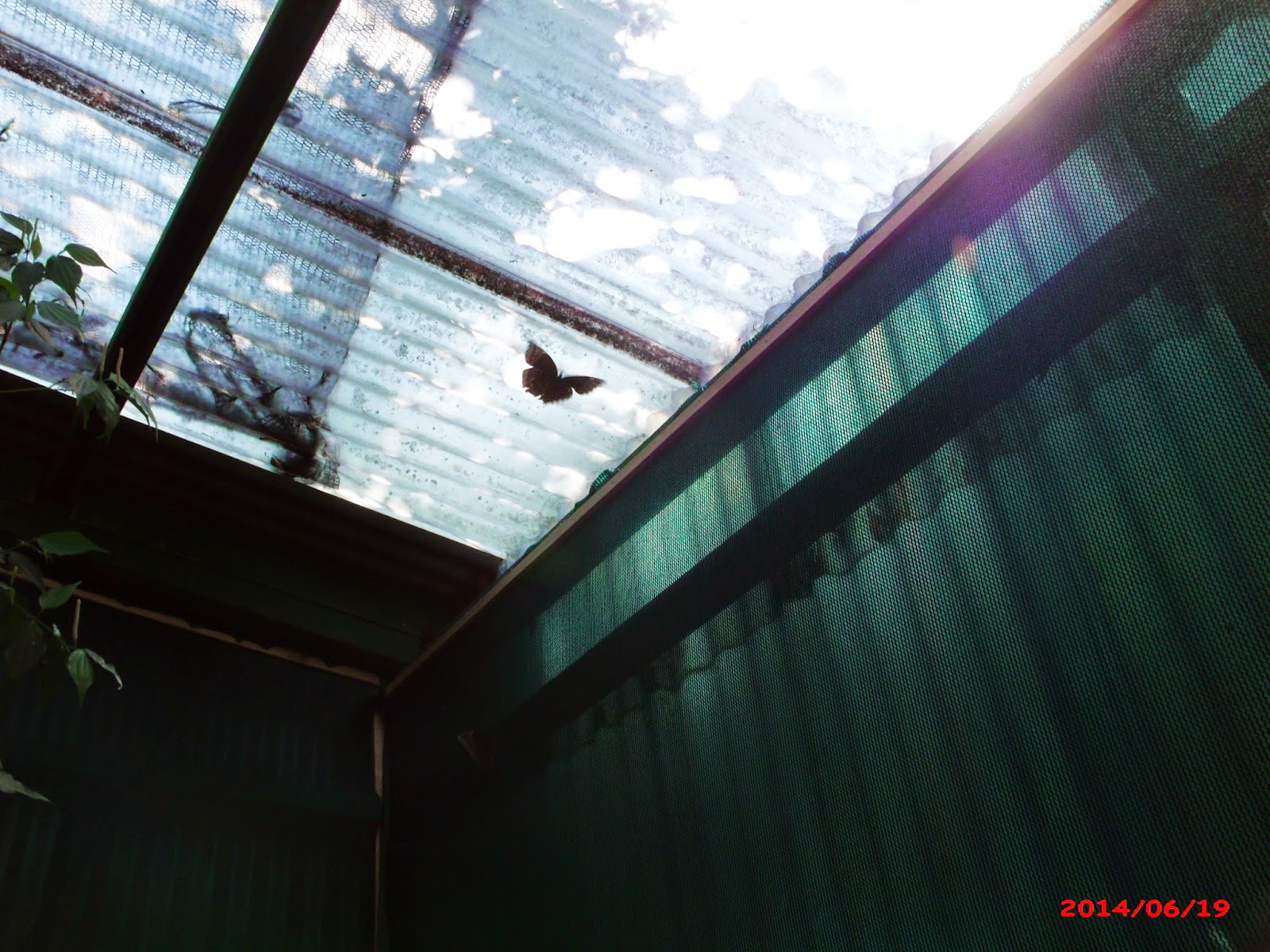 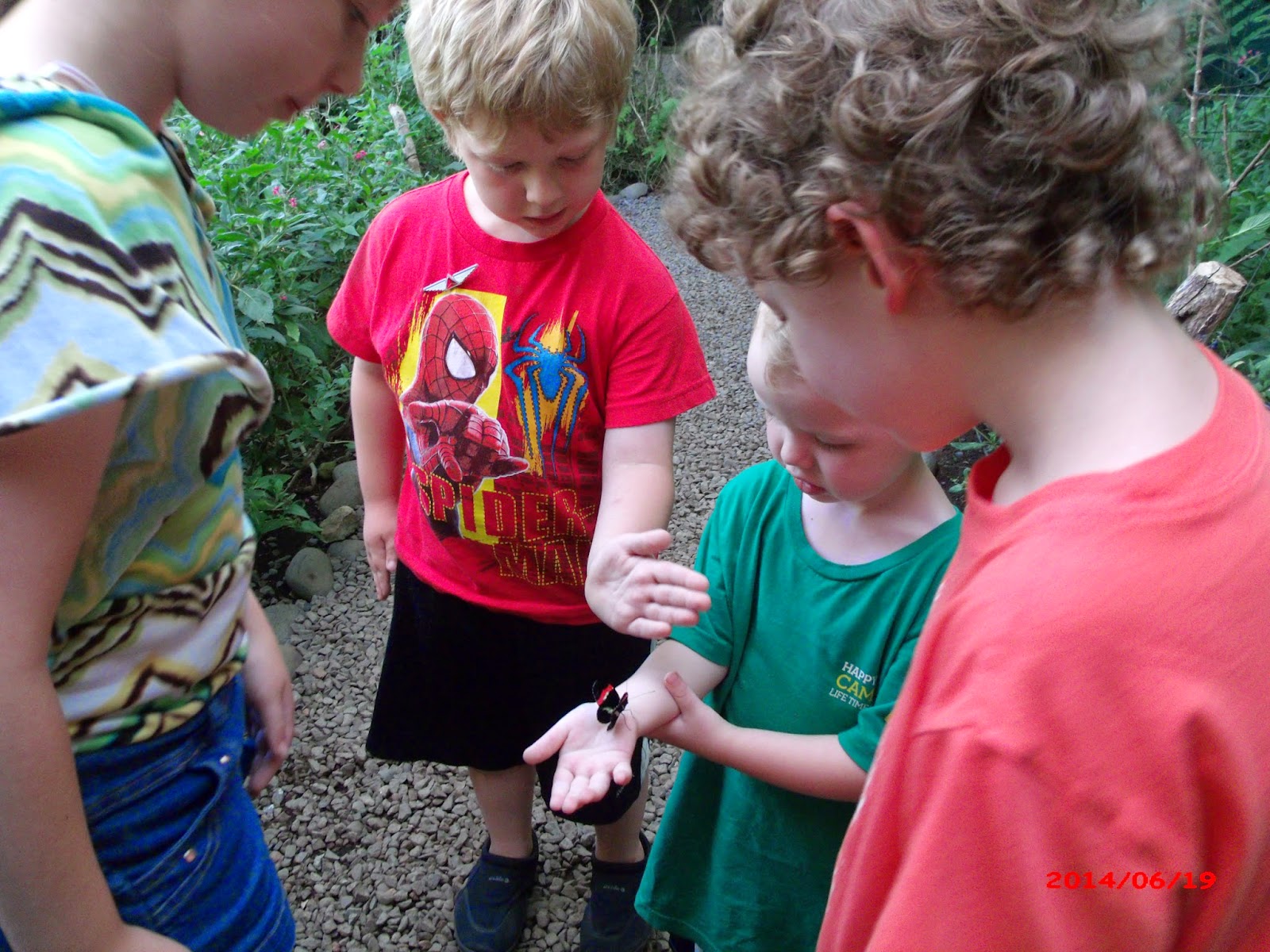 The kids also really loved the nature center, where our tour guide Michael showed them lots of interesting beetles, insects, and spiders.

After lunch at an Argentine cafe, the plan had been to take a short rest at the hotel and then visit a rainarium (frog and amphibian exhibit). Once back at the hotel the kids immediately headed off to hike the trails around the cabin. Brekken decided to take a shortcut back which left Rylen with cuts all up and down the backs off his little legs. (Poor kid also fell off his chair at lunch and banged his head.) By the time he was all bandaged up, the rain had arrived. We waited it out and when it was still raining at 7 pm we opted to give up on the rest of the plans. Aaron and Haley made a grocery stores run to grab something for dinner and we made an early night of it.

Lying in bed after the rain stopped you could hear that it was still a very windy night. You can hear the approach of every gust of wind because there are so many leaves to rustle with the movement of the air. And when the rain comes it's incredibly loud... It hits all those leaves, each drop with a burst of sound, multiplied by thousands as drops continue to fall. If you're in a traditional Tico house with a tin roof, the sound of the rain drumming above you is like sitting next to the drummer in a high school band who is convinced that continuous drum rolls are the way to go. It's so loud that you are almost shouting just to be heard by the person sitting next to you. It's perfect for napping or sleeping though.