We started the day with a dip in the pool. We also spent some time chasing tiny crabs from our rooms. We stopped for batidos for breakfast and headed for Bagaces and the Llano de Cortez waterfall.

Shortly after leaving Samara we were flagged down by a cop. Though Aaron has been very conscientious about obeying the speed limit, signs here are smaller and easier to miss. He was going about 20 Kmph over the limit. He was polite to the officer and explained that he had just missed the sign. It still looked likely that we would get a ticket until the officer complimented Aaron on his excellent Spanish and asked where he had learned it. When Aaron told him he had lived in Costa Rica a long time ago and learned Spanish then, the officer warmed up. He ended up letting us go with a warning.

We drove a bit further and stopped for ice cream at Pops and then got back on the road. We hit a construction zone where the speed limit lowers to 30 kmh for a LONG stretch. Our car can barely even be forced to go 30, it's so slow... And at that speed everyone is blowing by us like we're standing still. Even upping it to 45 so we're under the 20 kmh where tickets become an issue, we're by far the slowest car on the road. Maddening, but not worth risking a traffic stop.

As we pass the small city of Bagaces, we know we're getting closer to the waterfall. Our directions say to watch for a small sign 3 miles north of Bagaces. 3 *km* north we see the sign. It tells us that the waterfall is 8 km from the main road. We drive back about 1km and find the turnoff for the waterfall. A man wearing a shirt with the Bagaces city logo is standing next to the turnoff collecting donations to benefit Bagaces schools. Since the waterfall is on land owned by the city and its a good cause, we give a small donation. We even get a receipt, which makes it all feel more official.

We continue down the road which is rocky and rutted but far from the worst road we've driven on during this trip. Before long we arrive at an open area for parking. A couple of guys have set up a stand selling coconut water. This is where they chop the top of a coconut and stick a straw in the center so you can drink the coconut water. They keep the coconut on ice and sell the cool pipa fria all over the place. We haven't tried it yet.

When we elect not to purchase coconut water, the men inform us that we need to pay a fee to protect the car. Ugh. This again. This time we've already driven ask this way to reach Bagaces and paid the donation at the front, so we grudgingly pay the protection fee before slathering on the sunscreen and starting down the trail. This trail was no problem for the children, only a slight challenge to Aaron, and a trial for me. It's a dirt trail with lots of big rocks and large protruding tree roots. Between my bulk, my clumsiness, and my bad knees, it was a bit difficult to make the climb down, but I made it without incident. Brekken was a big helper. He helped me over the worst obstacles and was very carefully concerned with looking out for me. He's a sweetheart.

The reward was the gorgeous view of the Llanos de Cortes waterfall. It was beautiful. Multiple strands cascading down a rock face covered in creeping greenery and falling into a clear shallow pool at the base. A sandy beach led into the pool. We had hoped to actually swim at the waterfall, but the water was cold! So we did some wading. Preston and Brekken managed to fall completely in multiple times, but didn't seem too bothered. 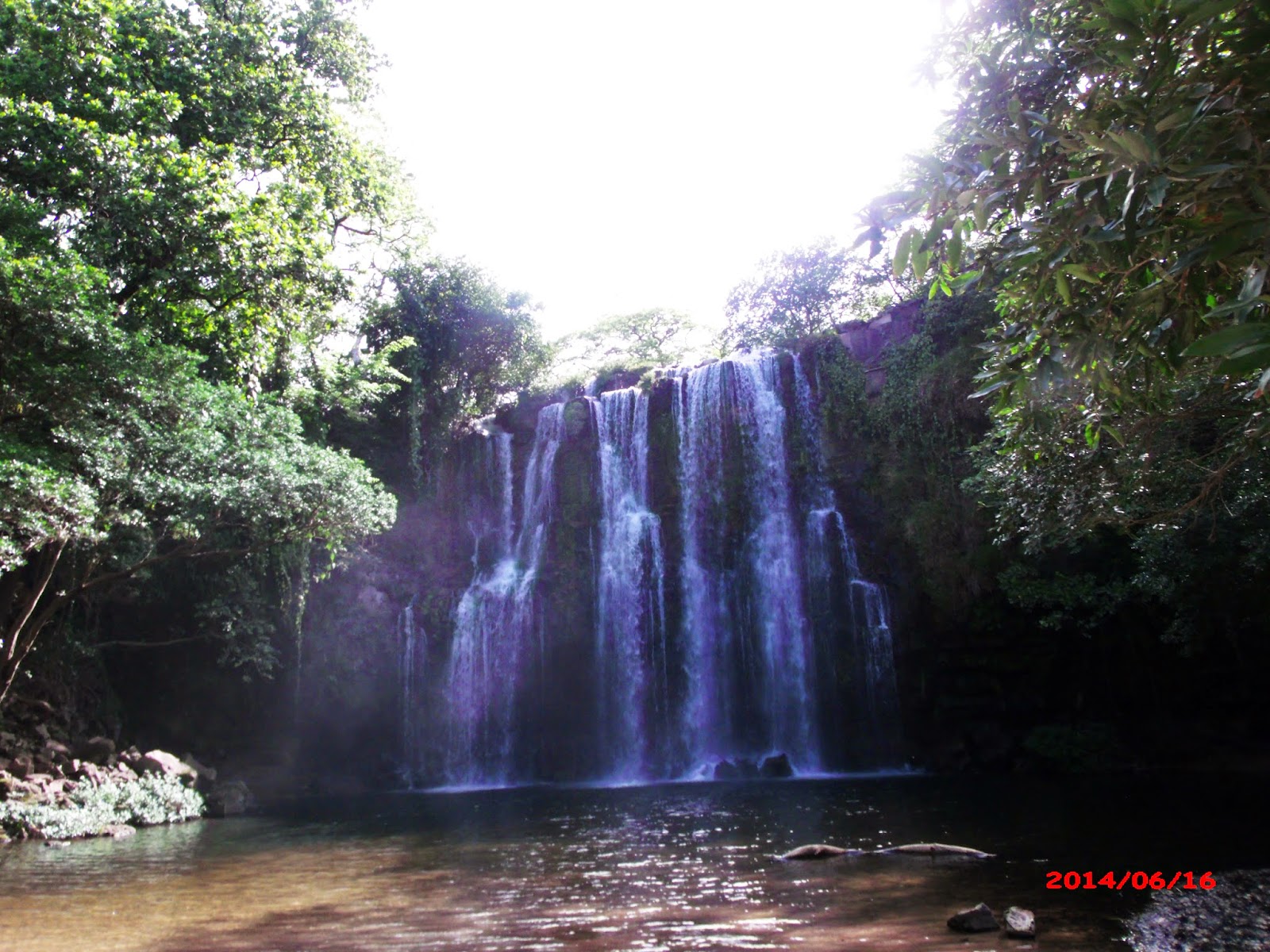 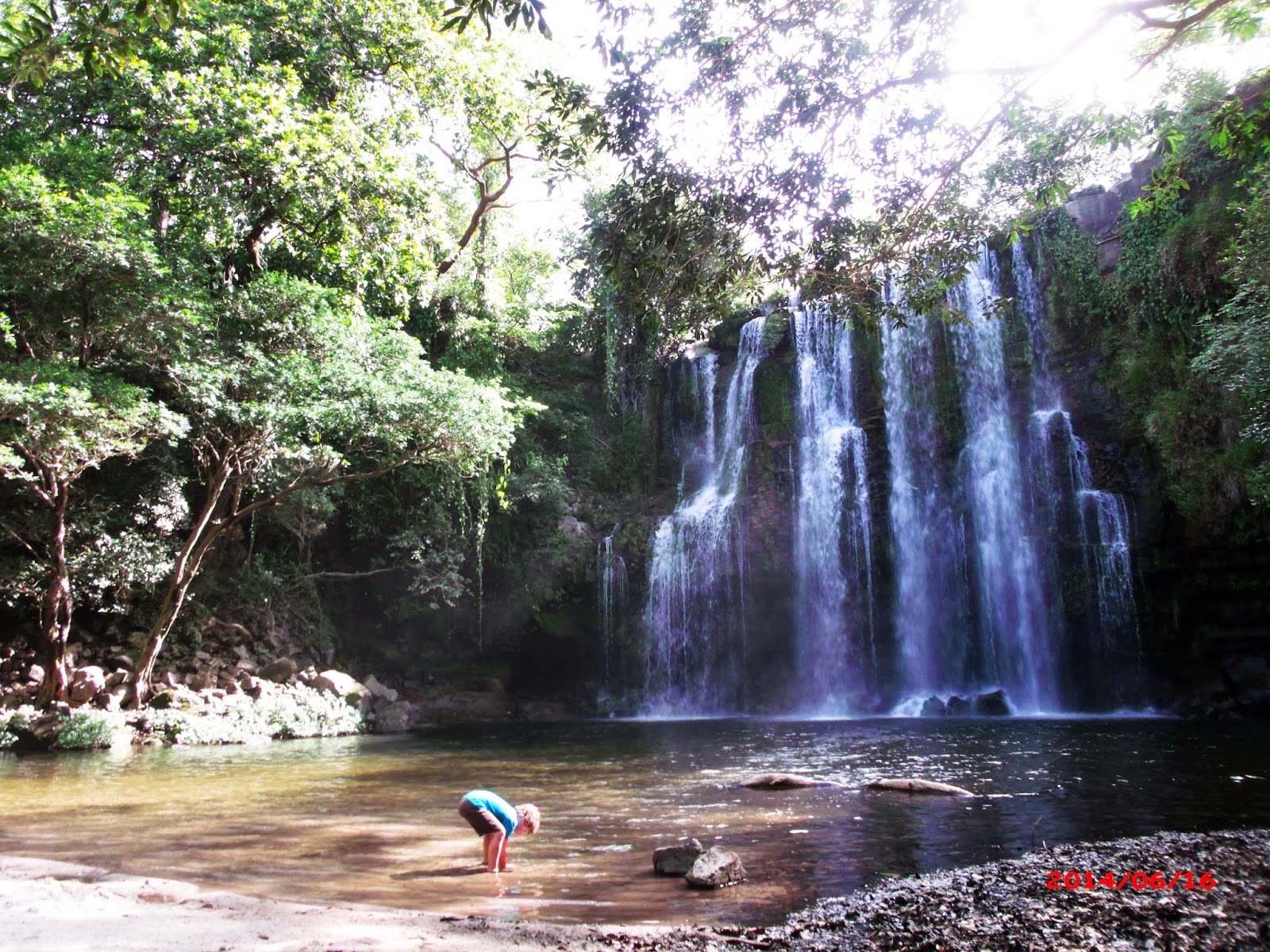 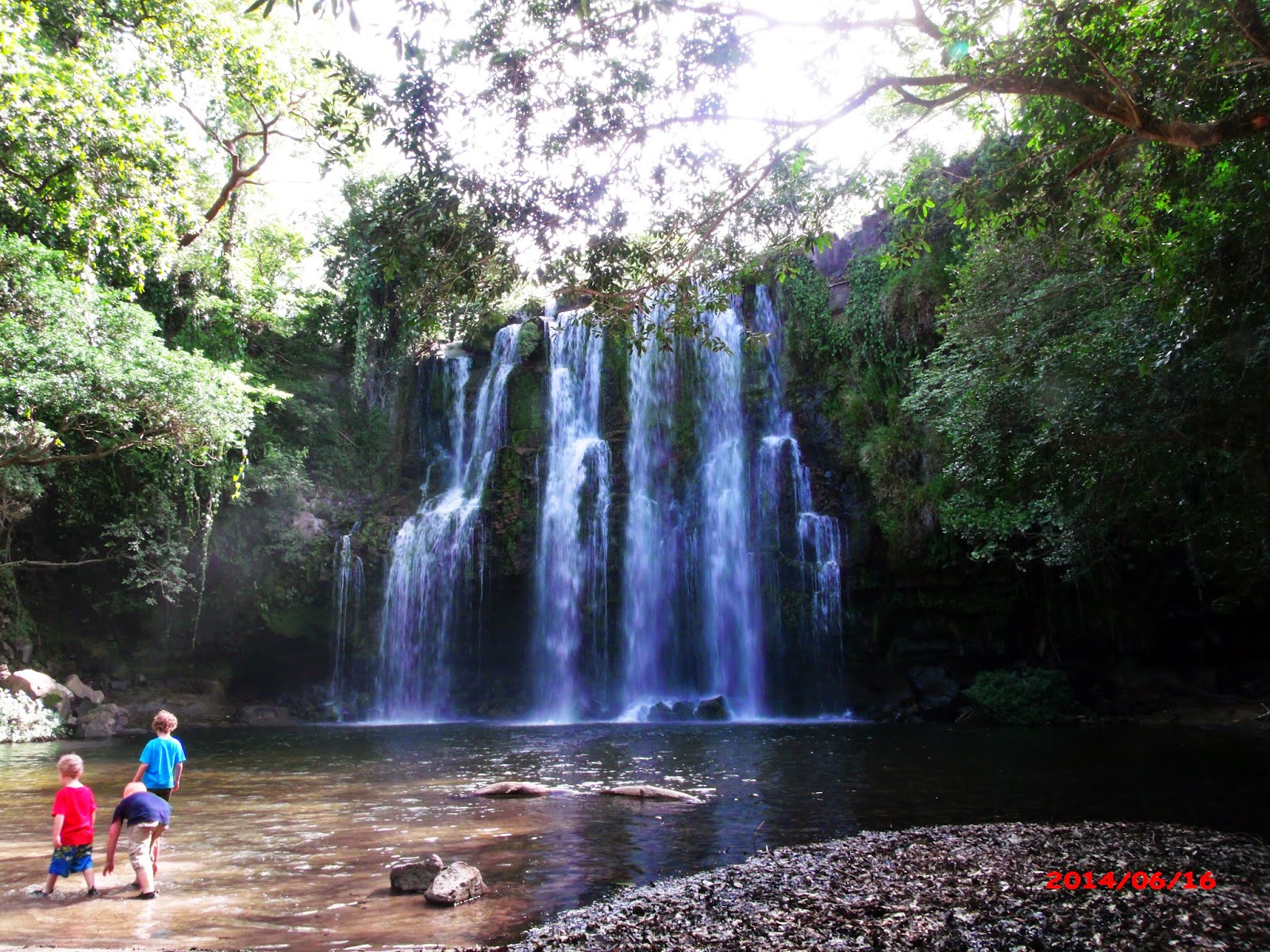 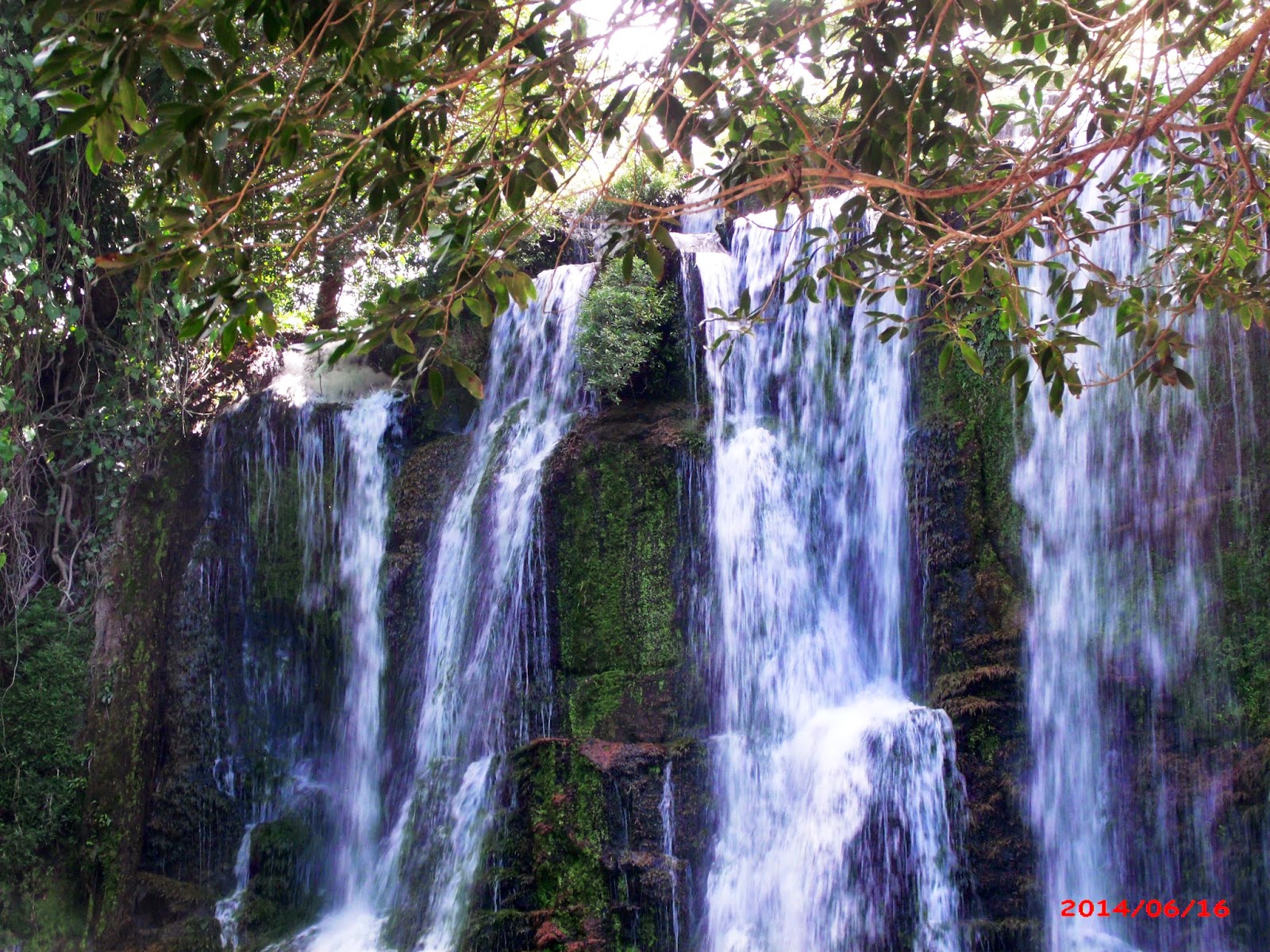 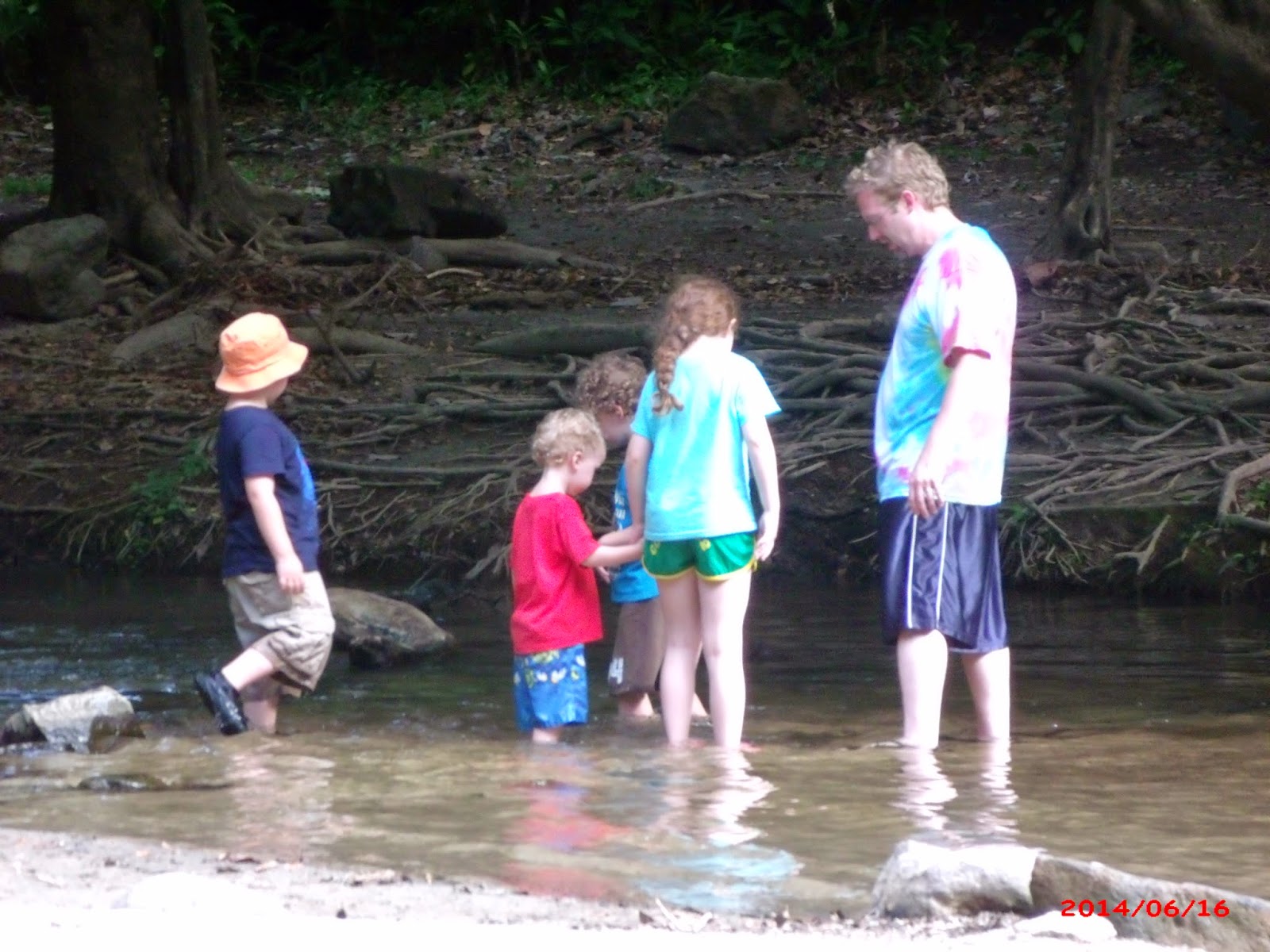 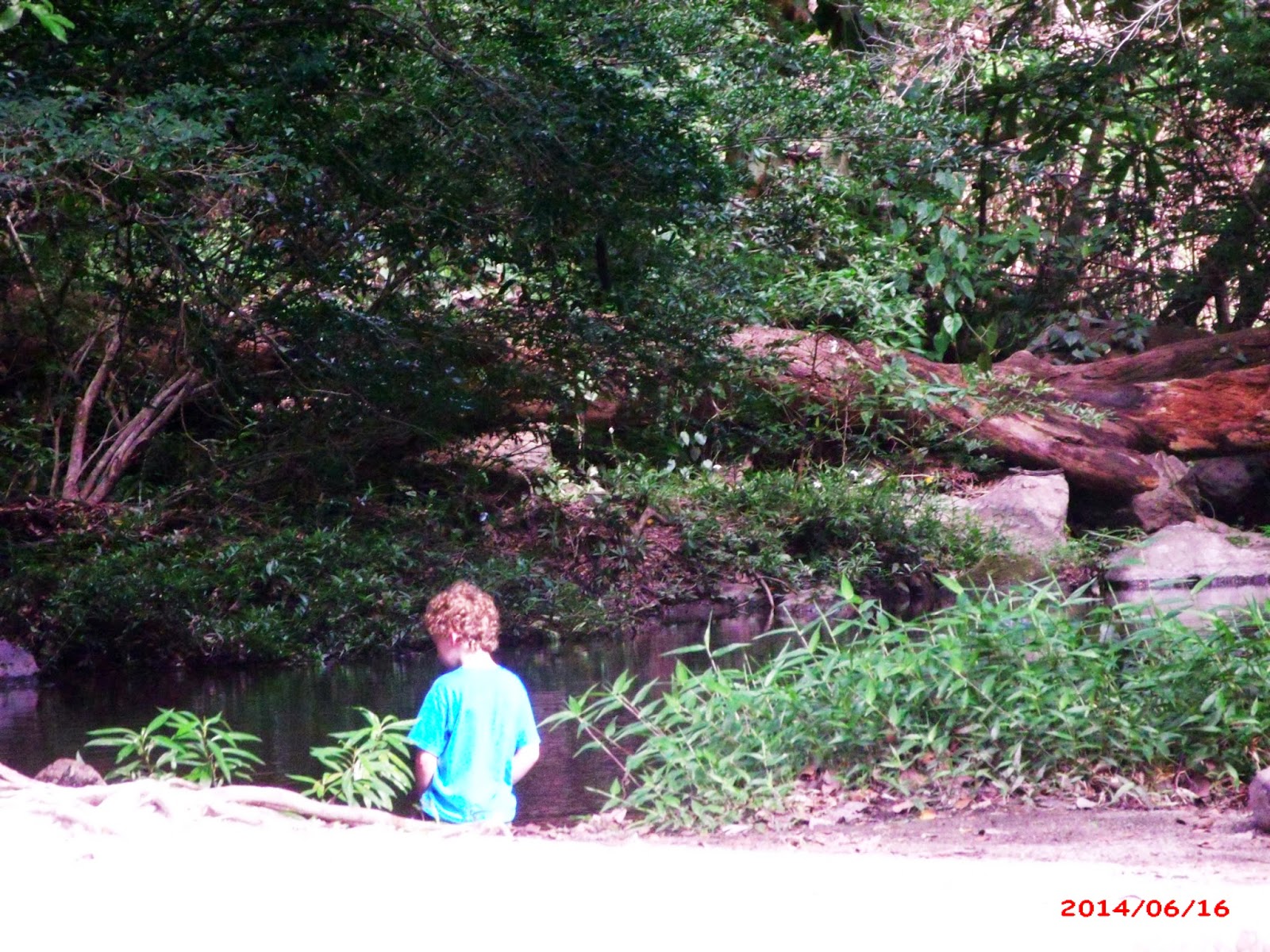 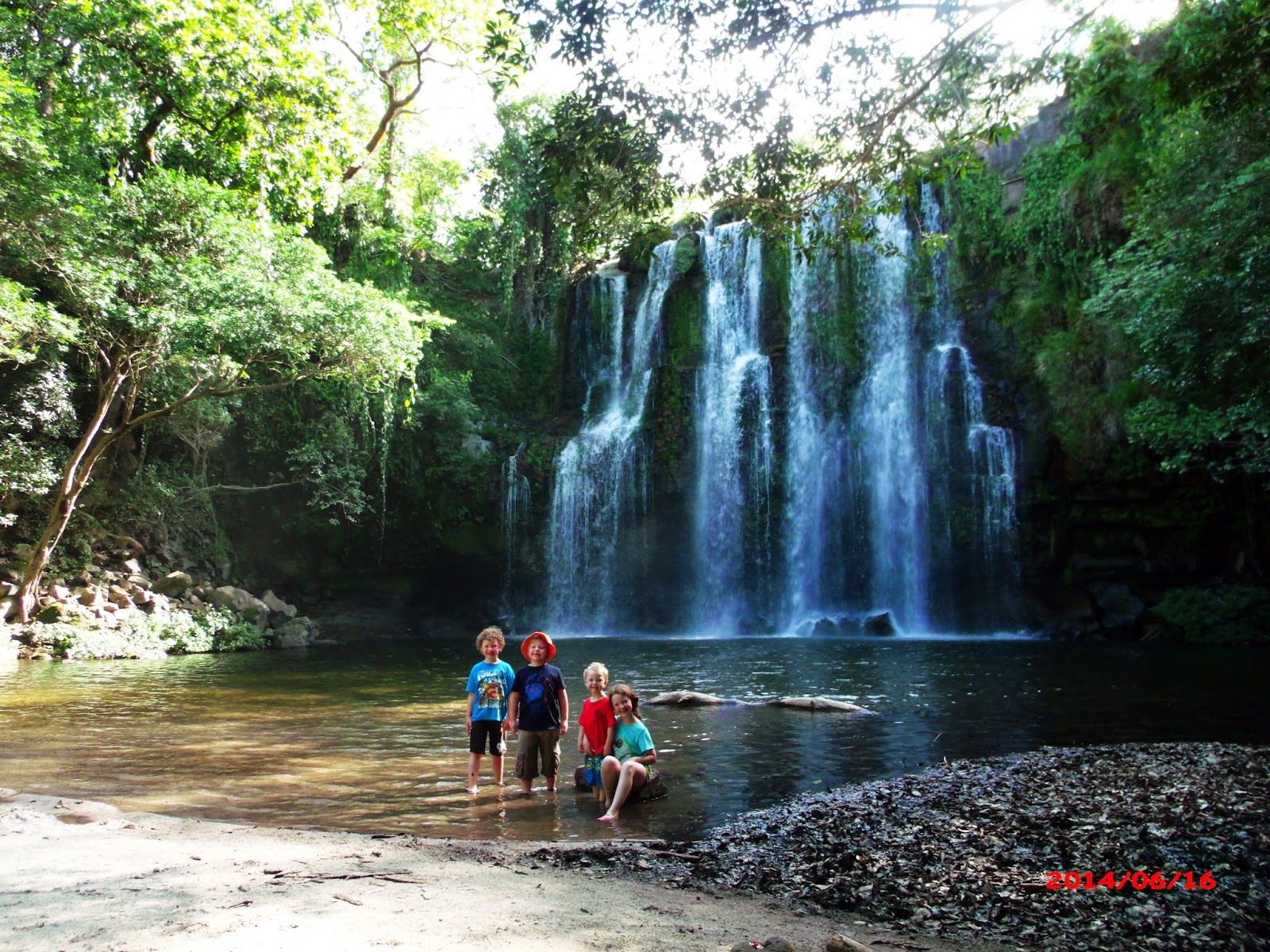 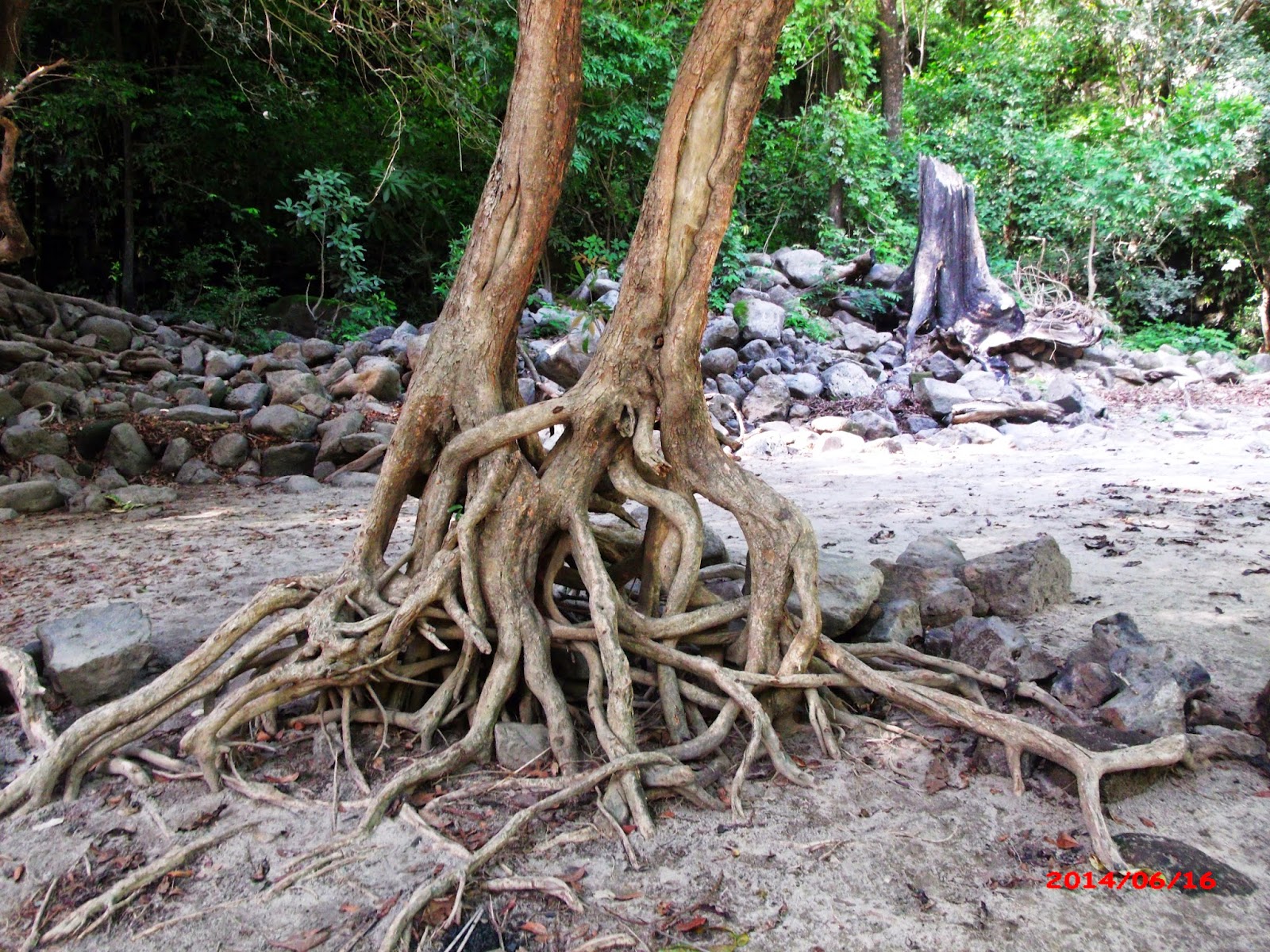 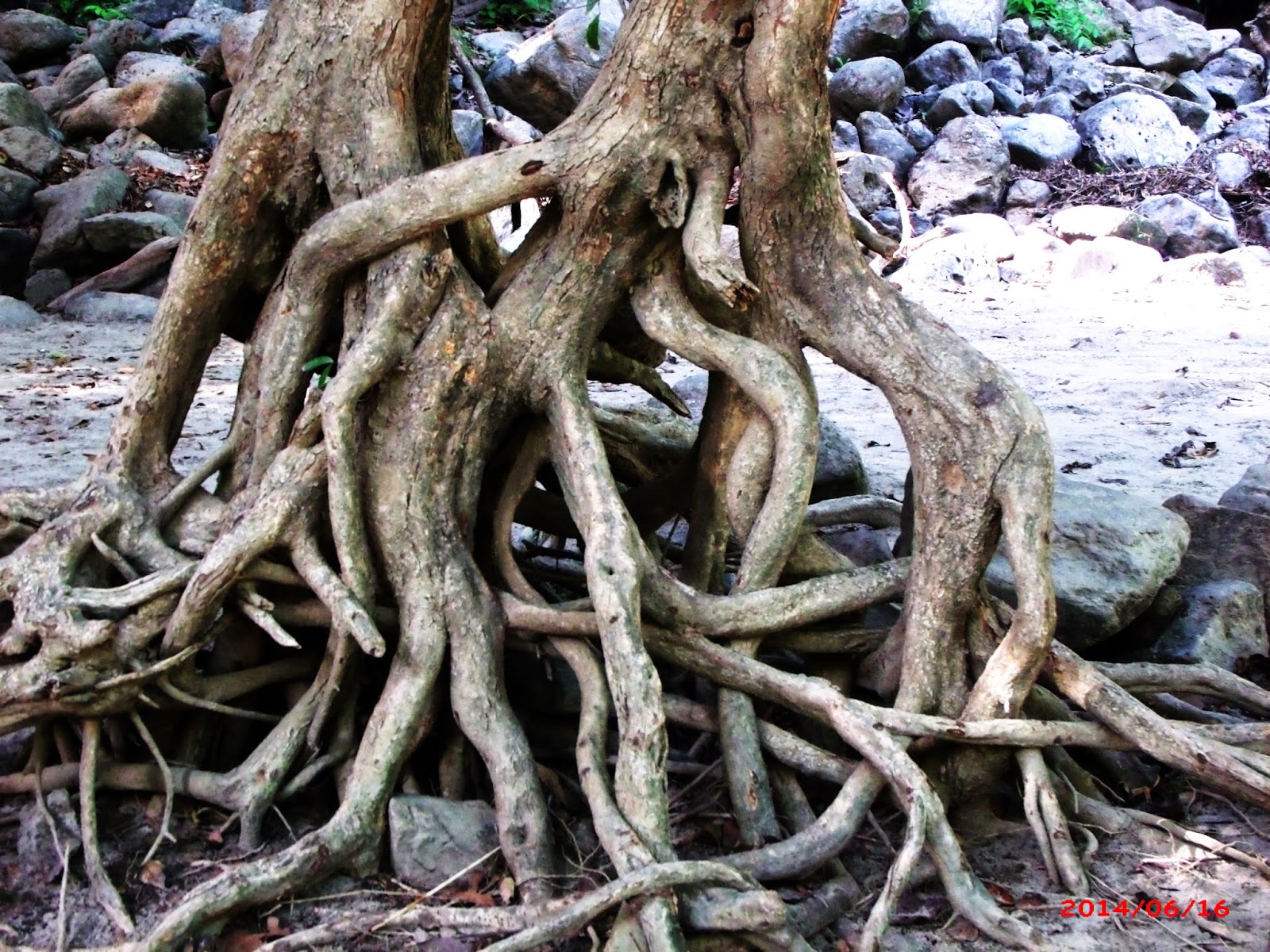 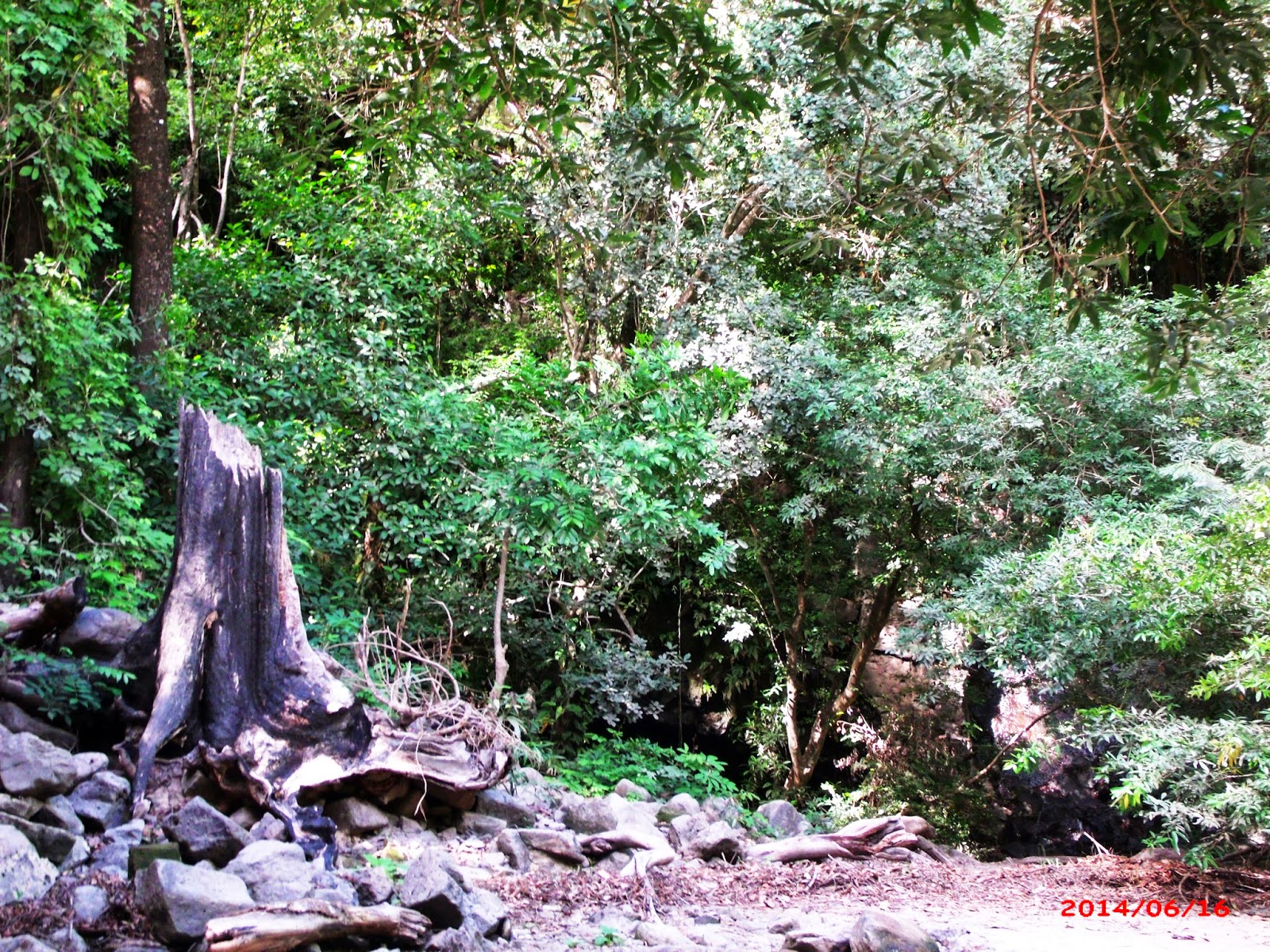 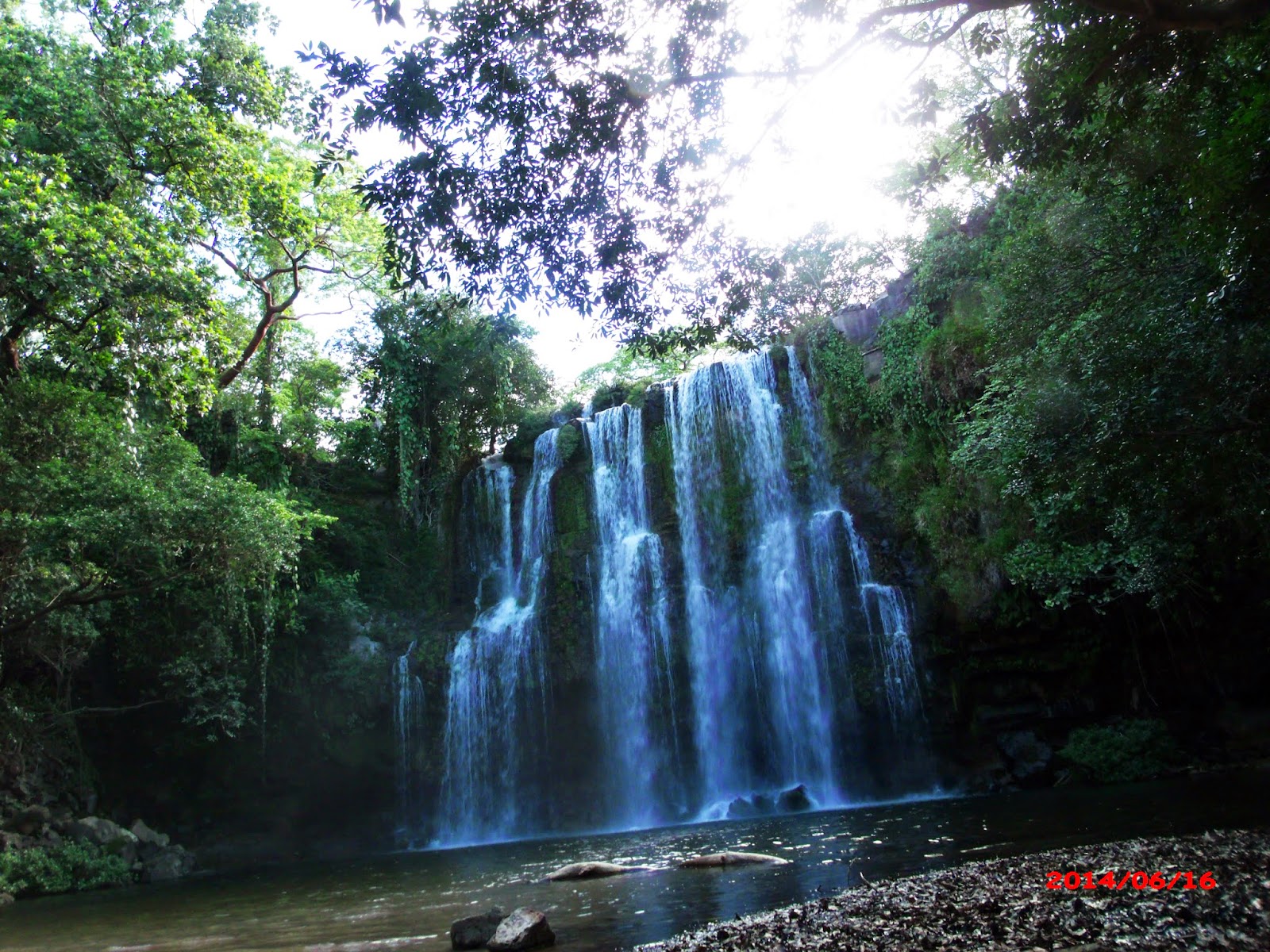 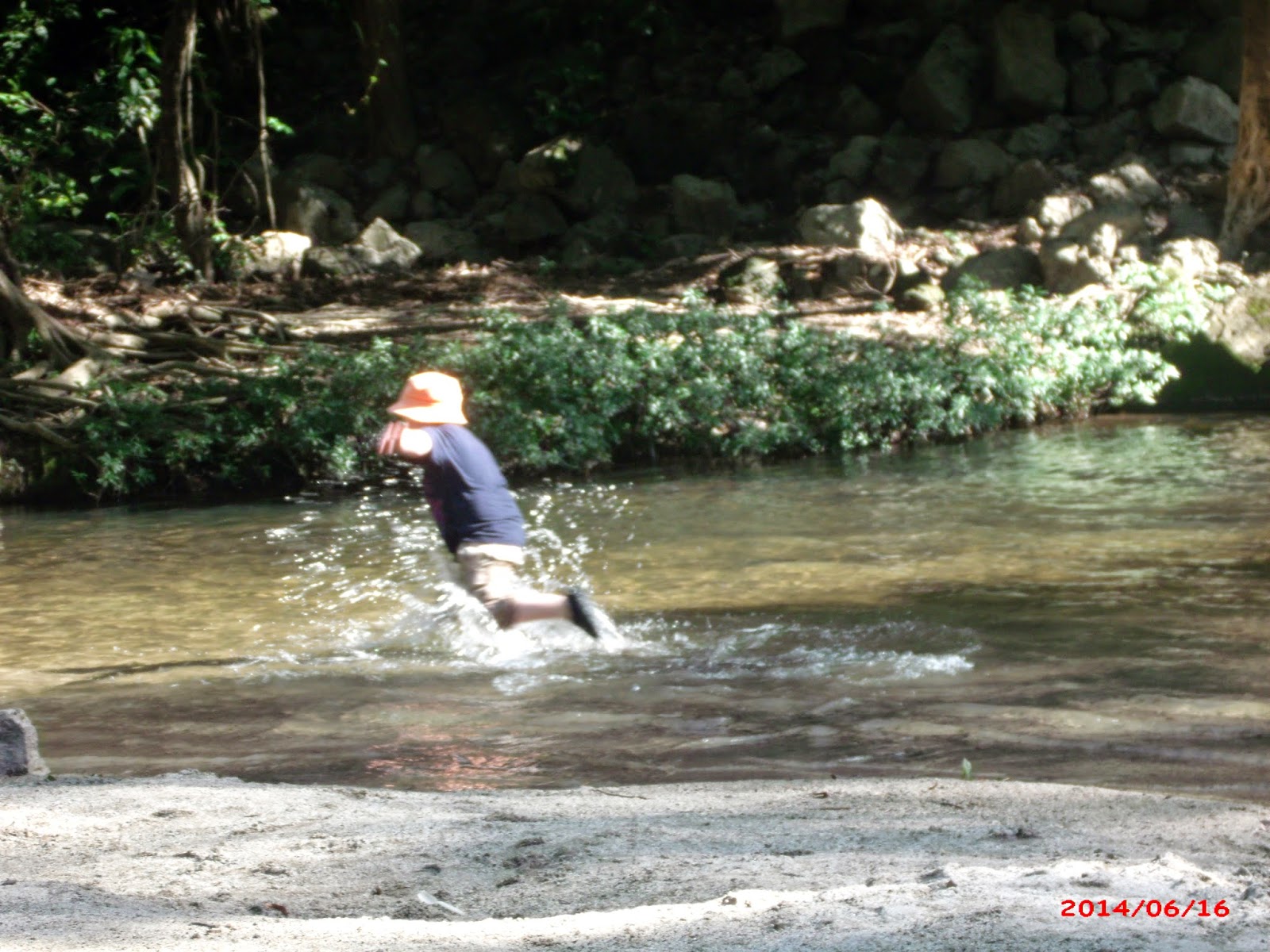 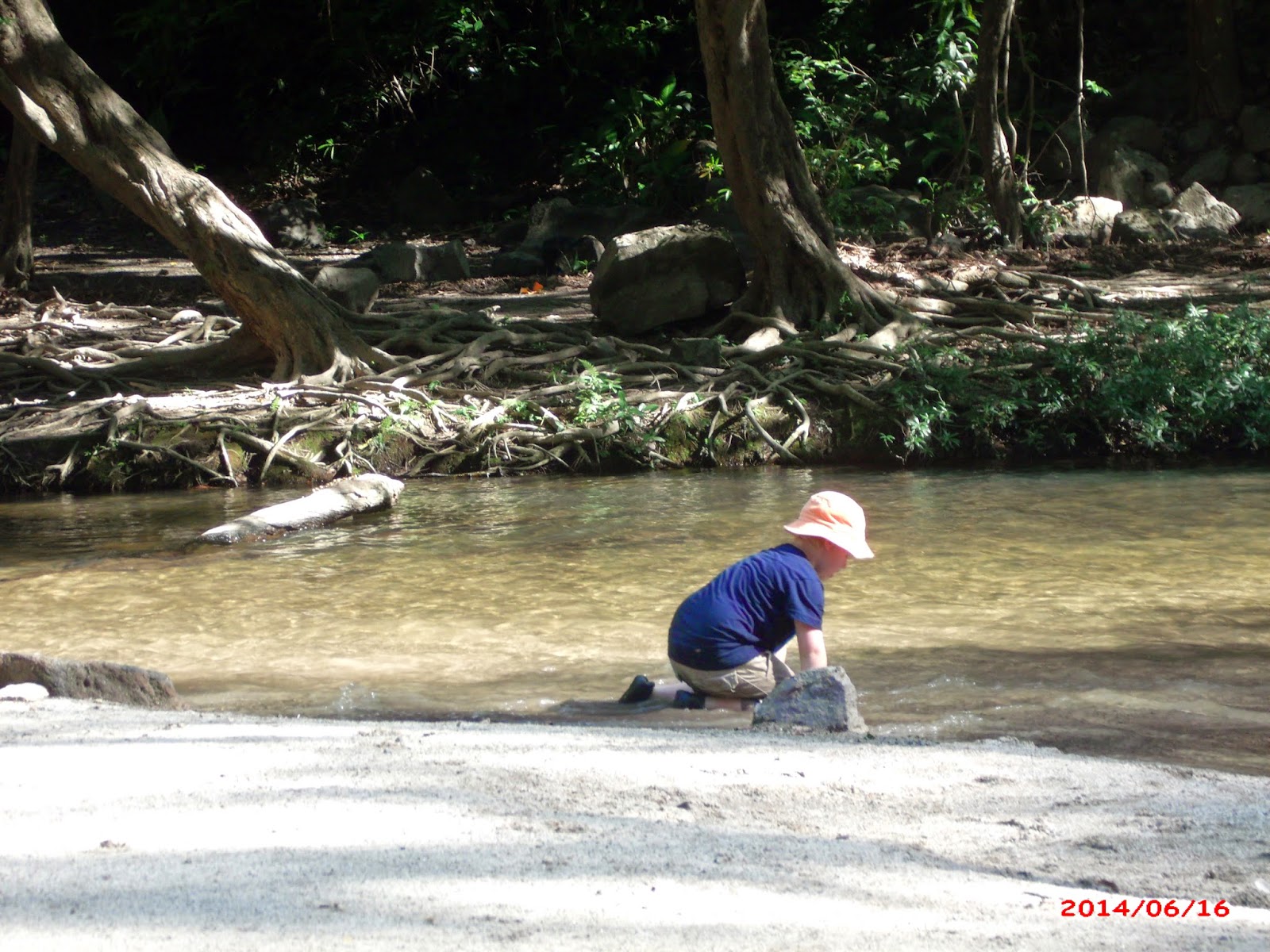 The kids saw a basilisk lizard. The went to a quiet part of the pool behind some bushes. Brekken found as lizard and Preston went to investigate. It scared another lizard who ran away... across the top of the water! As Preston put it, "I never thought I would see that for real not on Wild Kratts." They spent a good 30 minutes scaring the lizards and making them run across the water. Quote from Preston "it made me happy."

We could also see little fish swimming in the pool and lots of butterflies. One in particular seemed to really like the pattern on Rylen shorts and kept coming back to flutter around him. I really enjoyed sitting on a rock near the pool where a breeze blew the mist from the falls onto my overheated face. It was a lovely time and hard to drag the kids away... but we still had more plans for the day.

Now the hard part, getting back up the path. Steps that felt uncomfortably high on the way down were even more intimidating to climb up. I was very grateful for various trees and rocks along the path to help pull myself up over the obstacles. Breathing hard and sweating like a draft horse, Aaron and Brekken had to help me up in several spots. Once I had to actually crawl up a rock ledge to continue up the path.

I felt a LITTLE better about my extremely hot and sweaty state when we got in the car and realized that it was actually 106 degrees outside for our little hike. The climb down and up was rough, but worth it.

Next to Liberia... a big city nicknamed the White City. They have McDonald's, Burger King, and all the rest... It didn't strike me as hugely different from a similarly sized American city. We looked for a place to eat there, but also like an American city it was very hard to find parking. We gave up on Liberia and headed for the beach towns nearby. We eventually found a lovely restaurant right on the beach and watched the sun set over the water while we ate. There was music playing and surf crashing and candles on the table and delicious food. It was very nice. The bathrooms we visited on the way out of the restaurant were the nicest we've seen since entering the country. 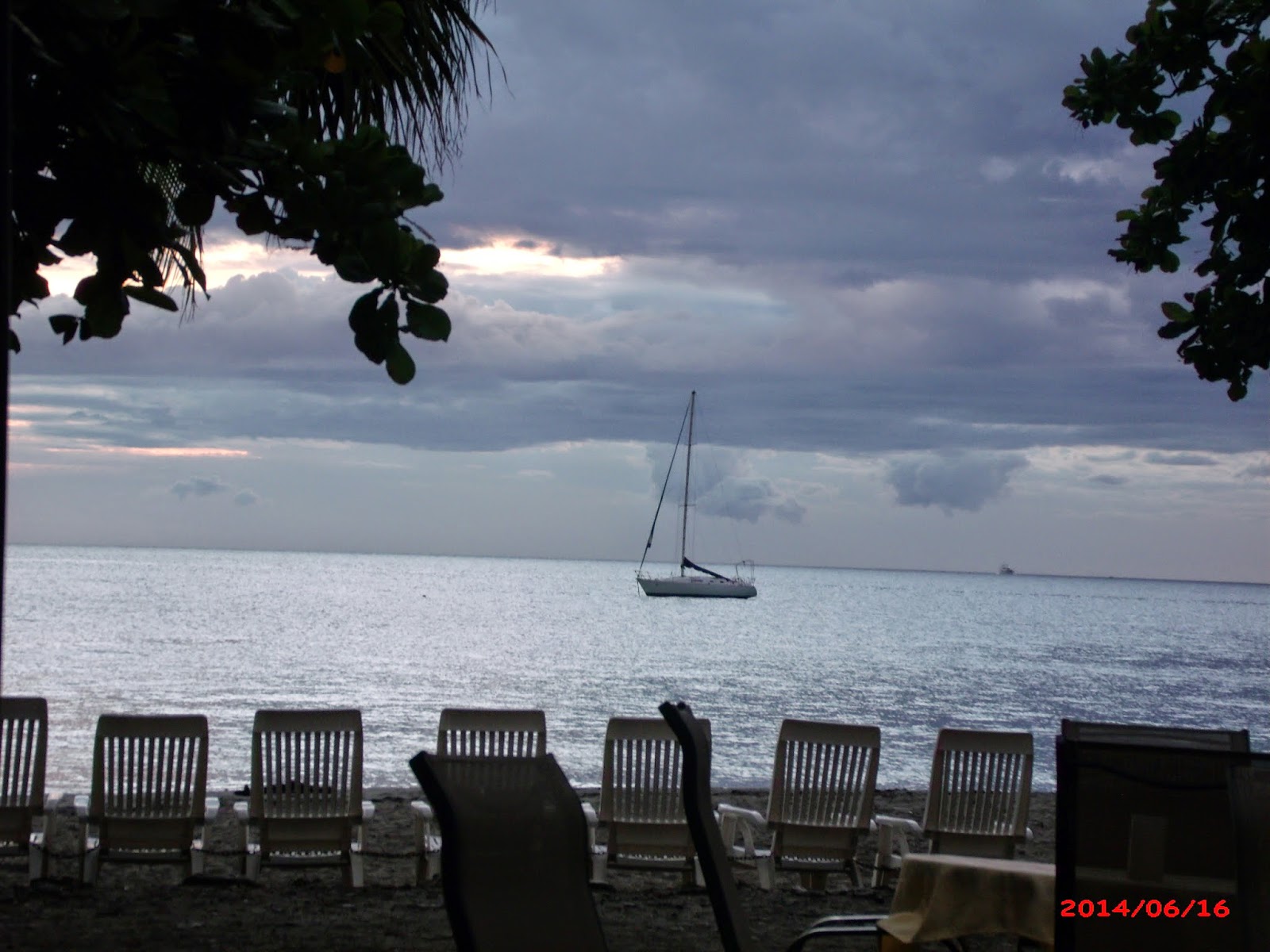 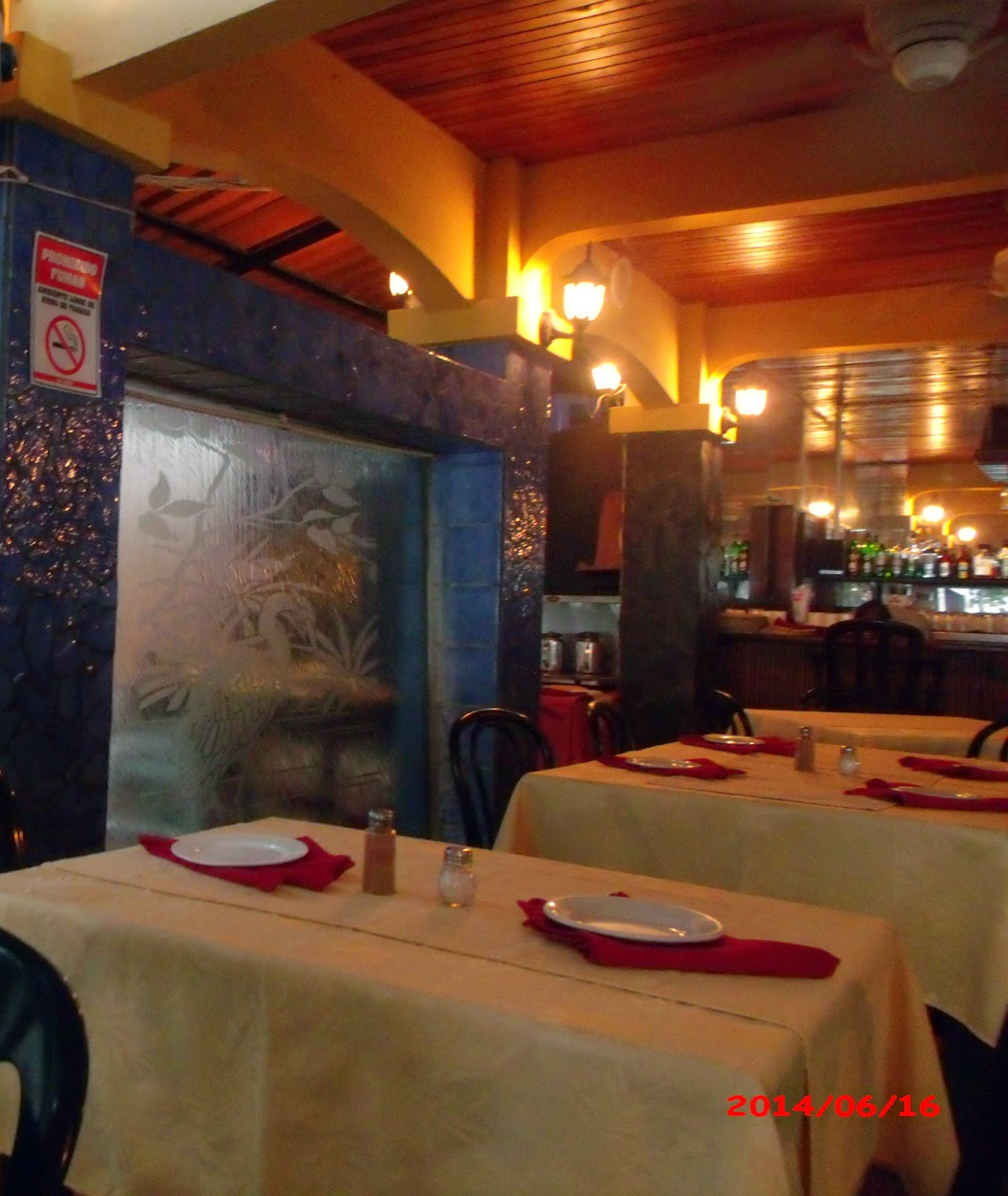 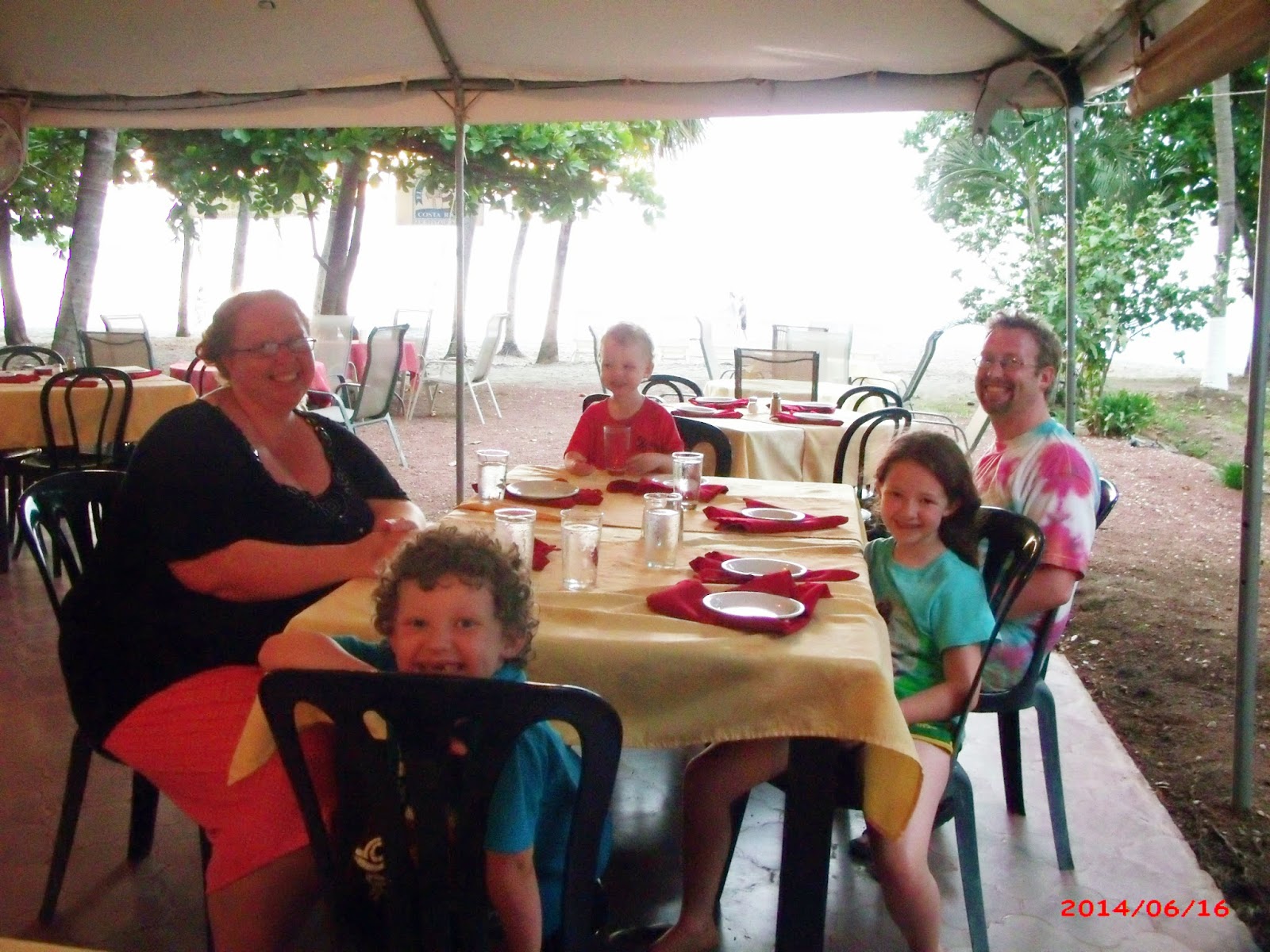 Now for the drive back to Samara, once again in the dark, with crazy drivers and invisible pedestrians. When I get back to Colorado, the drivers are all going to seem so reasonable and sane.

Ah, the sweet exhilaration of seeing someone get a well-deserved traffic stop! We were driving through a school zone - in Costa Rica the speed restriction applies at all times, not just in school hours. So there we are in a slow school zone, marked as no passing. We are behind an old motorcycle and going the speed limit of 40 kmh when the guy behind us gets impatient and pulls out to pass. As he is passing us, Aaron exclaimed in disgust because the guy behind the guy pulled out to pass, too. But suddenly the second car flipped on the lights. Transit police. :)
Posted by taradon at 12:34 AM